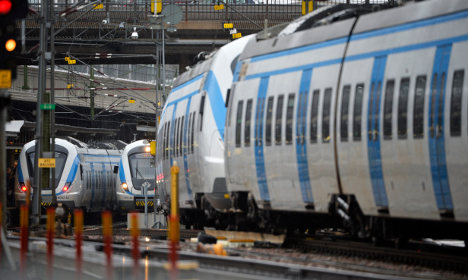 The delays are caused by planned maintenance work in several locations in and around Stockholm, which will be carried out between Maundy Thursday, April 2nd, and Easter Monday, reported Swedish Radio's news programme Ekot.

At least 35,000 rail travellers are expected to be affected, with the fast train from Stockholm to Gothenburg set to take up to three hours longer than usual. And people going from Stockholm to Malmö in the south will have to catch a bus for the leg between Södertälje and the Swedish capital. A number of sleeper trains north of Stockholm will also be cancelled.

"It's a bad decision. Easter is a time when many travel by train. And I'm going to Stockholm. When the train won't stop there, it will be difficult," one commuter from Borås in southern Sweden told Ekot.

But Jonas Westlund at the Swedish Transportation Authority (Trafikverket) said that reparation works were necessary to “take better care of the traffic needed in Stockholm”.

“You have got to see the benefits of this,” he told Ekot.

“We know that in the long run there's a strong need to increase traffic. All the actions we're now taking are to ensure that things will work well today and that we will be able to deal with the expected traffic increase in the future as well," he added.

On Monday, thousands of train commuters in Stockholm were stranded when a rail switch broke down near the central station. Because the switch was old, no spare parts were immediately available and it took hours before work could get underway.

By Monday lunchtime, Stockholm commuter trains (pendeltåg) were running more or less on schedule, with the exception of certain trains only going as Älvsjö just outside the city centre, instead of calling at Stockholm central station.

Long distance trains to Karlstad were going via Västerås west of the capital instead, with some regional trains to Hallsberg, Norrköping and Linköping terminating in Södertälje, south of Stockholm.

The incident spelled more rush hour chaos for Stockholm commuters, where escalators at 11 of the city's underground stations remain switched off after a woman nearly lost her leg in an accident last month.