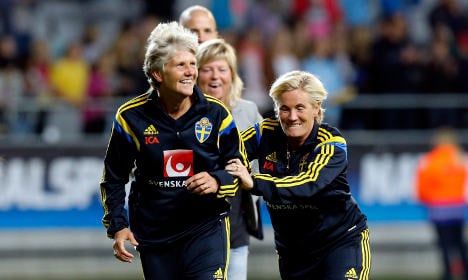 Sundhage, 55, has made her mark on the world stage with a long and successful career, leading the US women's national team to two Olympic golds and a World Cup silver before signing on to coach her native country's ladies in 2012.

An interview in Swedish newspaper Dagens Industri on Friday stirred rumours that she may be thinking of hanging her boots up when her contract runs out next summer.

The Local caught up with her to ask if word on the street is true.

“If the Swedish Football Association asked me today if I wanted to renew my contract, I would say no. But so far I think it is rather uninteresting to talk about, because they haven't asked me yet,” she said.

Voted Sweden's Sports Woman of the Year in 2008 and FIFA World Coach of the Year in 2012, Sundhage and her Swedish ladies took home a bronze in the UEFA Women's Euro 2013, losing out to Germany in the semi-final.

She is a hugely popular in Sweden and plenty would be disappointed if she were to retire.

“That's probably a discussion that should wait until after the World Cup this summer, but there is always someone else who can take over. And I will not disappear from football completely,” she told The Local.

She still has two other dreams to fulfil. One is to take up a position as an assisting coach for a team in the Swedish men's football league. The other is to use her managerial experience for the greater good.

“I want to lead an active life in the wider society, for example working with 16 to 18-year-olds who have perhaps lost their interest in football or their motivation or what not, to see if my leadership style would work for them and if I could inspire,” she said, adding with emphasis: “It's on the football pitch I want to be.”

The Swedish women's national side have wildly outperformed their male counterparts lately, with some even calling for Sundhage to take over the reigns from coach Erik Hamrén in the hope that she could lead Zlatan Ibrahimovic and his colleagues to cup glory.

But that option is not on the table, according to Sundhage.

“No, that's definitely not going to happen. Hamrén gets to spend even less time on the football pitch than I do.”

Next up for Sundhage is the FIFA Women's World Cup in Canada from June to July, with the United States and Germany as some of the favourites to win. So what does she think of Sweden's chances?

“The central line and the goalkeeper are important, if we can get ourselves together there we can go far. Caroline Seger, Lotta Schelin and Nilla Fischer are three world players who can inspire others to play well too,” she told The Local.