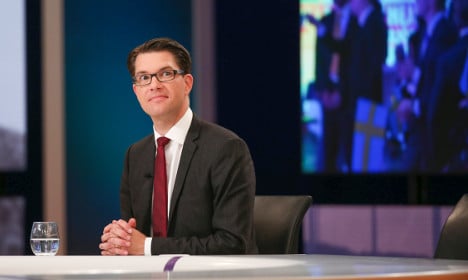 The leader of the Sweden Democrats, who has also struggled with gambling problems, has been on sick leave since October 2014, due to chronic fatigue following his party's election campaign.

It was revealed earlier this week that he is set to announce his return to politics at 9pm on Friday, as a guest on the popular television talk show Skavlan, broadcast on SVT.

Åkesson, whose appearance has changed markedly over his six months away from the public spotlight, talks about meeting a psychologist after he was first diagnosed with his illness.

"The first thing I said was that I didn't want any pills. And from what I've understood very many react that way at the beginning, that 'I'm going to make it through this without that'. It took a few days before I went to the pharmacy and collected them, then I felt dizzy for about two weeks. After that it has got better. If it's because of the pills, something else or if it's a combination, I don't know. But I think they have helped me," he tells the studio audience in a clip quoted by tabloid Expressen.

The Sweden Democrats are the third largest political group in Sweden, scoring a record 12.9 percent of the vote in September's election. During Åkesson's six-month absence, Mattias Karlsson has been the party's acting leader and some had suggested that he could take over the helm of the party permanently.

But on Monday SVT released details from tonight's interview with Åkesson saying he will return to work in successive stages from March 31st. But he tells Norwegian talk show host Fredrik Skavlan he is not sure he will gain politically from talking openly about his problems.

"There's obviously a reason why others don't choose to talk about this. It's because you're scared, as a political leader, to be perceived as weak. 'How are you supposed to return to your party leader job now, you who are taking antidepressants? You, who are so weak, how are you going to manage?' But I think that for the sake of both the voters and myself, I have to be open about this," he says.

But Sweden's public broadcaster SVT has faced a wave of criticism for the decision to invite the anti-immigration party leader to discuss his politics on prime time television, with Dagens Nyheter columnist Johan Croneman writing: "If I had been a political reporter for SVT I would probably have been pretty upset that you let one of the hottest political potatoes right now end up on [Skavlan's] cosy sofa instead of on the political barbeque."

And popular stand-up comedian Jonas Gardell tweeted, "Hold on: so the kids and I are expected to sit in front of the TV with soft drinks, crisps and Jimmie Åkesson? What kind of bloody cosy Friday is that???"

But SVT programme director Robert Olsson defended the decision, saying the interview was "newsworthy as well as of great public interest".

"You only have to look at the kind of attention the interview has received to understand that there is great interest in Åkesson's comeback to politics," he told the GP newspaper earlier this week.