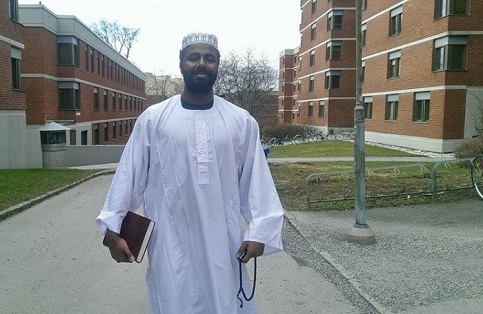 It’s not easy to be a Muslim in the west these days.

Right-wing fanaticism is at an all-time high. Xenophobia and bigotry against Muslims – even those who are second or even third generation immigrants – are rampant. A wave of Islamophobia is sweeping across the occident. Large parts of Europe, the cradle of modern civilization, seem to be engulfed by a frenzy of ethno-centrism and anti-Muslim hysteria.

My cousin, who lives in Italy, emailed me a link to a story reported by The Independent newspaper. The story featured Hamdy Mahisen, an Italian-Egyptian student, who conducted a social experiment: basically, he dressed in what the newspaper described as “traditional Arabic clothing” and walked around Milan for five hours, while holding the Holy Quran in one hand and Muslim prayer beads in the other.

The experiment, which was caught on video, showed how rampant Islamophobia is in a supposedly cosmopolitan city. The young man was shouted at and subjected to a string of derogatory comments, ranging from “Shit! Have you seen The ISIS” to “Look, he has got the Koran. Think he’s got a gun under his tunic?”

I couldn’t finish reading the article. I felt pain radiating from my heart. True, palpable, physical pain. How could these people be so inconsiderate? Since when is a man’s clothing an indicator of what lies beneath?

“Now hold on just a second” I thought. “This will never happen here in Sweden”.

I looked up from my computer screen and scanned my semi-dark room with eyes still reeling from the shocking article I’ve just read. A few inches away lies my prayer rug, and a copy of the Holy Quran on top of it. My white Jalabiya (a traditional long robe worn by men in Arab countries) hangs from a coat hanger I hastily stuffed in an overly-cramped, distressed-looking closet.

And then it hit me.

“I should re-produce Hamdy’s social experiment here in Stockholm”

An ephemeral moment of excitement, followed by long hours of apprehension and doubt. Regular readers of this blog know that I’m a staunch fan of Sweden and everything it stands for. People say “never meet your heroes”, but I have, and it’s been fantastic.

But what if my “hero” – Sweden – had a hidden, ugly side that I don’t know about? What If people sneer at me, much like the Milanese did to Hamdy? Will I be able to go on with my life here as if nothing has happened?

Nevertheless, I was adamant.

Fast forward fifteen hours… There I was, enveloped in ‘traditional Arab clothing’ from head to toe, with the Quran on one hand and ‘borrowed’ prayer beads on the other. “I certainly look the part” I thought. And, despite everything, I couldn’t help but feel a rush of excitement and an adrenaline-induced tingling in my extremities.

The plan was simple: I’ll take the subway to T-Centralen (the central subway station in Stockholm) in rush hour, and just walk around the station for a while.

Then, I’ll walk a few hundred meters to Gamla Stan, Stockholm’s picturesque old town which is almost always busy, and just wander aimlessly for an hour or so, and then end the day at Stockholm’s large (and popular) King’s park (kungstradgarden). I chose those places because, as far as I know, they’re among the busiest in Stockholm. I reckoned thousands of people will probably see me in my rather unique attire. This can yield statistically significant results.

Being the center of attention of a large group of people isn’t really a good place for an introvert, but I was set out to do it.

There were some looks, definitely. Very subtle, very “Swedish” looks. No sneering, no shouting, and no Islamophobic comments, just pure curiosity. Whenever my eyes meet with someone’s who just couldn’t resist the temptation of looking for just a couple more seconds, he or she would greet me with an awkward smile and look away with an almost apologetic expression on their face.

Gamla Stan, my most favorite place in all of Sweden, was looking pretty ravishing that day. There weren’t as many people as I hoped, but there were many police officers. Thirteen, I counted.

I walked towards them with a stern expression and a slightly defiant look in my eyes.

I wondered, as I was getting closer to the group. My heart raced as I was walking past them.

“They’re law enforcement, it’s OK to feel a bit shaky” I murmured assuredly to myself.

They looked at me, and two of them smiled.

I closed my eyes for a while in the subway train. I was tired, cold and happy. I walked for hours in an exceedingly low temperature, wearing something primarily designed to cool down those who live in a desert, and yet I was viscerally satisfied.

In my semi-trance state, my mind was comparing the barbaric treatment the man in the video was subjected to, to Stockholm’s adorably awkward reaction to my outfit.

I heaved a sigh of relief and opened my eyes. The man right in front of me was staring at me.

“That’s not a subtle, curious look” I thought. “That’s an accusing look."

I closed my eyes again for a minute or so, and then opened them suddenly. The man was still intensely staring.

For the next four stops, our non-verbal conflict intensified. I gave him my nastiest look, and clutched my fists subconsciously. I wasn’t going to tolerate any verbal abuse. He seemed to want to say something, but my stern look – which I’ve been practicing for some time – seemed to deter him.

When I reached my subway station, and as I was about to get off the train, he finally managed to mutter a few words in Swedish.

“Pardon?” I said. The drums of war were beating loudly in my head.

“Sorry. Your hat is fabulous. Where did you get it?”

All thanks to my friends Nada and Ibrahim for the beads, the advice and the photo

This post was republished with permission from the SI blog of Ayman Idris, a Sudanese student studying entrepreneurship and innovation management at KTH. Check out his blog and others at Study in Sweden here.