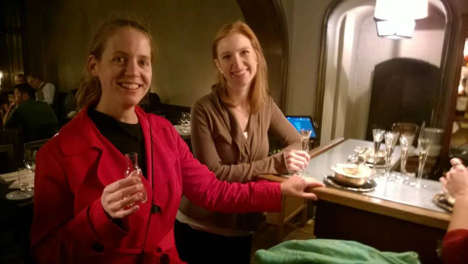 This is the setting at Aifur, a well-known Viking bar in Stockholm's Old Town (Gamla Stan) and the first of four stops on the Stockholm Historic Pub Tour.

What started as a mutual interest, has turned into an exciting part-time career for American expat Tiffany Alnefelt and her Swedish husband, Patrik.

“We wanted to give you the chance to drink your way through Swedish history.”

“Last summer my husband and I were both reading a book called ‘The Four Hour Work Week’ by Tim Ferriss and we both thought it would be fun to find a side project we could do together, so this was in the back of our minds.”

“I took one of the free sightseeing tours around the city with my parents, and the next morning I woke up with the idea.” She adds, reflecting on the pub tours she had taken in London and Ireland.

“I found there was a tremendous amount of history here.”

Within a week, they had a website and a business plan and by October they would be hosting their first test run with a group of their closest friends.

“Patrik and I work really well together as partners. He is very business-minded and supportive and I am the idea person.”

It was a very careful process to decide which pubs to include on the tour.  Each establishment was chosen for their quality, history and atmosphere.

With this in mind, both realized it was vital to include Aifur as well as Den Gyldene Freden, the oldest restaurant in Stockholm.

“If they said ‘no’ then we wouldn't have been able to move forward,”  explains Alnefelt.

The two pubs that would complete the tour are  Källaren Movitz and Monks Porter House.

“All four pubs were so positive and welcoming.”

After leaving Aifur, guests are guided through the cobblestone streets and told about the churches surprising involvement with drinking and Gustav Vasa’s exclusive mead cellar in Tre Kronor.

The next stop is Den Gyldene Freden, where guests have the opportunity to sample the same spirits  that trubador Carl Michael Bellman drank with his friends as he wrote his famous songs.

Both Aifur and Den Gyldene Freden use recipes that are representative of the original from 17th and 18th centuries.
“These recipes are very exclusive,” she adds. “ For example, you can only taste his specific snaps at Den Gyldene Freden, you cannot buy it at Systembolaget,” she adds, referring to Sweden's state-run alcohol monopoly.
“Next we take you through a very dark period in Swedish drinking history during the middle ages where drinking spirits had become rampant, to the extent that people had drank beer before,”  she explains.

Movitz Källare is the next stop, where guests get to sample porter, a dark brown beer made popular during the “Sobriety Movements” from the 18th century.  Guests learn about Sobriety taverns, The Rations Book,  and the bizarre “cures” for alcoholism during this time period. The tour finishes up at Monks Porter House, where guests get to sample three microbrews.

“I feel like by the time the tour is over I'm leaving a group of new friends,” explains Alnefelt.

“Most people share their own cultures, experience and drinking stories,”  she states. “By the third stop everyone is talking to each other, even if they started as strangers.”’

She says that luckily they have not had any problems with guests thus far because people aren't drinking in large quantities, “just enough to get a good taste!”

Alnefelt and her husband have hosted visitors not only from Sweden, but from various European countries as well as the United States and Canada.

“The scariest tour I have given was when I had a Polish man and an Englishman who I could tell thought 'what is this young American girl is going to teach me about drinking?!’  But I won them over!”

“Most guests say they find us through Trip Advisor and through our Facebook campaigns,” Alnefelt explains, but her business also partners with gift firm Upplevelsepresent, event website Spontano and private tourism group Stockholm Info.

Currently, Stockholm Historic Pub tours take place on Thursday and Saturday evenings, but more dates may be added in the upcoming months based on demand.

The tour takes approximately 2.5 hours and the cost of six drinks is included in the ticket price of 495 kronor ($57). There are non-alcoholic options for those who are just interested in the history.

For others hoping to start a business in Sweden,  Alnefelt says: “I think its easy to feel overwhelmed about the rules and regulations when you are in a new place and even more so if you don't know the language.

“I don't see myself as an expert on giving business advice, but you just need to put yourself out there,” she says.

“And networking is super important!”.