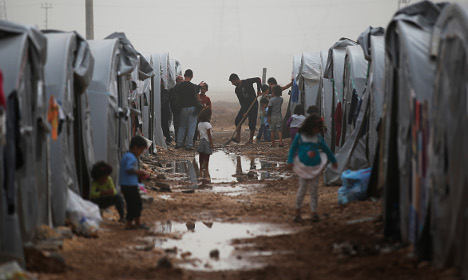 Syrian Kurdish refugees who fled Kobani, in a refugee camp in Suruc, on the Turkey-Syria border, October 2014. Photo: AP/TT

The ministers did not give an exact time frame for the disbursement of the aid money but said it would be used to “alleviate suffering, support democratic forces and assuage the consequences for neighbouring countries.”

Sweden would have representatives in place in Kuwait this week for a donor conference on Syria, the minsters said.

“As the conflict is worsening and is increasingly spreading to neighbouring countries, Sweden is pledging 350 million kronor at the conference on Tuesday in humanitarian support for the Syria crisis in 2015.”

This was an increase from last year, when Sweden gave 270 million kronor in humanitarian aid, the ministers said.

Sweden was continuing to work closely with the United Nations to improve conditions for refugees fleeing Syrian war zones, the ministers said.

They added that Sweden would commit extra resources to protect women and girls from forced marriages, kidnappings and sexual violence.