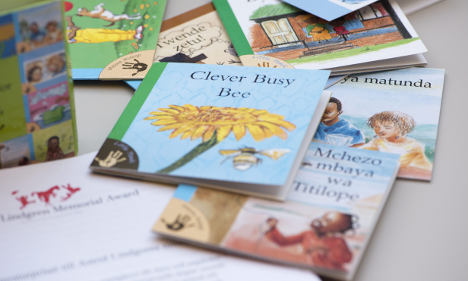 The prize, named after the Swedish creator of the adventurous schoolgirl character Pippi Longstocking, went to the Cape Town-based Project for the Study of Alternative Education in South Africa (PRAESA).

The group encourages children and young people to read for enjoyment, to build up their self-esteem and help them connect to their native languages through reading and stories.

"Through innovative reading and storytelling projects, PRAESA brings people together and brings literature in multiple languages alive," the jury said.

"PRAESA's outstanding work shows the world the crucial role of books and stories in creating rich, full lives for our children and young people."

At a June 1st ceremony in Stockholm the group will receive a cheque for five million kronor ($581,000, 536,000 euros), which organisers claim is the world's largest prize for children's and young people's literature.

Since 1992 PRAESA has produced a series of books in various African languages, organised national reading clubs and arranged story telling and theatrical events in Cape Town and other parts of Africa.

Last year it won the Asahi Reading Promotion Award, from the International Board on Books for Young People (IBBY).

Previous prize winners include Kitty Crowther of Belgium, Maurice Sendak of the United States and Philip Pullman of Britain.

The prize has previously been awarded to two other groups promoting children's access to books: the Tamer Institute which works with Palestinian refugees, and Banco del Libro which brings books to children in remote Venezuelan villages.

The Astrid Lindgren Memorial Award was created by the Swedish government after Lindgren's death in January 2002.