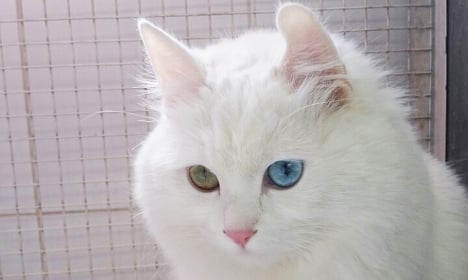 The animal shelter in Grängesberg, central Sweden, raised funds through its Facebook page to bring Mela to Sweden after receiving a message from a concerned Swedish villager to say how much the Syrian asylum seeker was missing her pet.

The woman had brought the cat with her when she fled Syria but customs officials in Sicily impounded Mela and the woman had to travel on without her.

“The money started coming in very quickly. We had to add a little bit of our own money too but we quickly got almost enough to make it happen,” Minna Lind at the Hopp för Hemlösa (Hope for Homeless) shelter told The Local.

The Syrian woman, who is in her thirties, managed to flee the war in the Middle Eastern country with her two brothers. Only one of the brothers survived the escape, which Lind said included a perilous sea journey to Sicily.

The woman now lives at a home for asylum seekers in Värnäs, 400 kilometres north-west of Stockholm, with her younger brother.

Once the shelter had cobbled the money together, Minna Lind’s daughter, who lives in Milan, flew to Sicily and took Mela out of her six-month quarantine. The cat — registered in her passport as an Angora, though Minna Lind’s not sure that's right — then spent two months in a Milan veterinary clinic.

Minna’s daughter Madeleine visited the clinic several times a week to check on the cat.

“Mela is deaf but that doesn’t matter, it’s still good to talk to her,” said Minna Lind. On Saturday Madeleine flew with the cat from Milan to Arlanda airport in Stockholm, and now Mela is waiting to be reunited with her owner on Good Friday at Minna’s shelter.

“I have heard that the woman is very, very happy and grateful about this. The only wish she had in her life was to see Mela again." Minna Lind noted however that more help was needed, since asylum seekers in Sweden get only a small daily allowance to cover their most basic needs.

“That’s not going to be enough to look after a cat, so now we are going to try to collect some more money for her. We are giving her a climbing box and toys from the shelter but obviously she will need more than that,” said Minna Lind.

"But first I am just really looking forward to meeting everyone when they come to pick Mela up on Friday.” Mela at the animal shelter. All photos courtesy of Minna Lind.
Sweden takes in more asylum seekers per capita than any other European country and requests are rising to record levels, with about 90,000 applications anticipated by the end of 2015.
Numbers have been steadily rising since Sweden became the first European country in 2013 to grant automatic residency to Syrian refugees, but it has also accepted thousands of others from nations including Eritrea, Iraq, Afghanistan and the Balkans as well as a growing influx from Somalia.