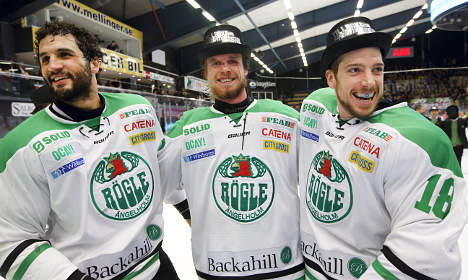 “He is wanted on suspicion of assault,” prosecutor Margareta Danielsson-Olvon told The Local.

“An investigation is ongoing. We don’t know where he is and have put out a warrant for his arrest.”

Rögle BK, a second-tier ice hockey team from Ängelholm in southern Sweden, terminated Deveaux’s contract on Monday amid mounting anger over his attack on Per Helmersson, team captain for VIK Västerås, in a play-off game last week.

A video of the attack appears to show the Canadian player skate in from behind and slash Helmersson full-force across the legs with his club.

VIK Västerås reported the 31-year-old to Deveaux to the police on Monday.

Police are set to question Helmersson about the attack and will also seek to get Deveaux’s version of events – as soon as they can find him.

Prosecutor Danielsson-Olvon said a court could theoretically jail the Canadian player but added that a range of factors would be taken into account.

Sweden could request an international arrest warrant for Deveaux if he does not turn himself in to the police.