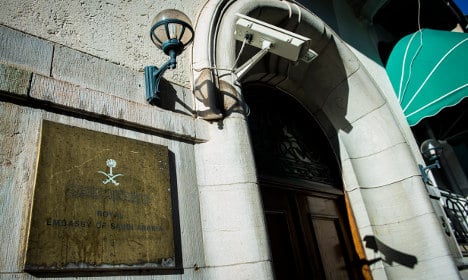 Saudi Arabia recalled its ambassador to Sweden in March and announced that it would not issue any new visas for Swedish business people in retaliation for comments made by Foreign Minister Margot Wallström. Its United Arab Emirates neighbour quickly followed suit.

Both ambassadors are set to return to Stockholm this week, said the Swedish Foreign Ministry.

He added that the Foreign Ministry expects that business visas will be issued again to travellers going to Saudi Arabia as diplomatic relations get back to normal.

Maria Rankka, CEO of Stockholm's Chamber of Commerce, who is in Saudi Arabia at the moment to speak at a conference for female professionals and academics, welcomed the news.

“The signals I have been getting here on site is that the diplomatic crisis is a thing of the past,” she told TT.

READ MORE: What Swedish firms should learn from Saudi row

The ambassador's imminent return was reported last week, indicating that tensions between Sweden and the oil-rich nation had calmed somewhat.

“I'm very pleased that we can resume our normal diplomatic ties,” Wallström told reporters at the time.

Ambassador Ibrahim bin Saad al-Ibrahim was recalled in mid-March in the wake of Wallström's remarks about Saudi Arabia. She criticized the situation around women's rights in the conservative kingdom and the absolute power held by the royal household.

Wallström had also called the punishment inflicted on regime-critical blogger Raif Badawi – ten years in jail and 1,000 lashes – as “medieval”.

Around the same time, Sweden cancelled a long-standing military cooperation deal between the two countries, which prompted Saudi Arabia to prevent Wallström from making a speech on human rights to the Arab League. Saudi Arabia also froze Swedish business visas to the Gulf kingdom and the UAE recalled its own ambassador to Stockholm.

But Wallström throughout the row has maintained she has the support of the Swedish people in expressing her opinion. "I do not regret my choice of words," she told the daily Expressen last week.