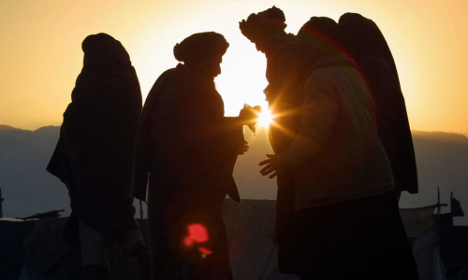 Twenty-three Afghan interpreters and guards have been offered residency in Sweden over the past couple of years after the Migration Board (Migrationsverket) ruled that their lives were at risk. The Swedish Armed Forces (Försvarsmakten) found it likely that they would be arrested and killed in Afghanistan.

David Loveday of law firm 'Advokatfirman Öberg & Associés' has been representing a group of several translators. But seven of them were never granted residency. They are part of dozens who have helped Swedish troops on the ground during the conflict in Afghanistan.

“It is incredibly serious. It's an absolute obligation according to the European Convention on Human Rights. It's completely against the rule of law to not even explain how our clients' needs for protection will be ensured,” Loveday told Swedish Radio on Tuesday.

The lawyers have now reported the Swedish Armed Forces and the Migration Board to Sweden's Parliamentary Ombudsman (Justitieombudsmannen). In the report they write that large parts of the process of allowing the translators to stay in Sweden have been arbitrary and without legal foundation.

INTERVIEW: "If we find you, we will kill you"

And Loveday criticizes the authorities for the closed process.

“We have not been given any insight into why the clients have been treated differently and there has been no transparency regarding the conditions which the Armed Forces and other authorities have applied in examining their grounds for protection,” he told Swedish Radio.

“Other countries in the EU – as well as in the United States – have had clear, published guidelines on who receives protection after service in Afghanistan. To us it is completely incomprehensible that Sweden does not have similar guidelines,” he added.

In October last year, the Migration Court in Malmö ruled that the Migration Board was wrong to reject the residence applications of the seven Afghan interpreters without assessing their protection needs.

Loveday told The Local at the time: “This is a great step for our clients. Since they first requested protection in 2012, these individuals have been left in Afghanistan without any proper, individual assessment of the risks they face, at least as far as we can ascertain.”

“What this judgement establishes is that the Migration Board has a duty to assess the need for protection from risks that arise as a result of their service with Sweden's Armed Forces.”