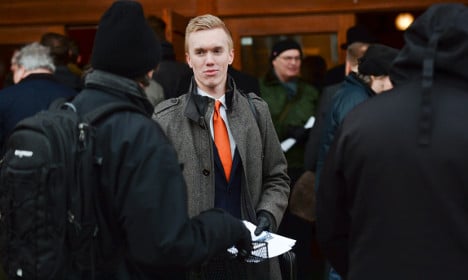 Acting party head Mattias Karlsson refused to confirm the reports, but said that around 20 members were under investigation by the Sweden Democrats' (SD) members committee. A final verdict is expected by April 27th.

“The leadership of SDU is said to have liaised with people from external extremist organizations in order to together move their position forward and change the ideological direction of the mother party,” he told Swedish tabloid Aftonbladet.

The nationalist SD is Sweden's third-biggest party, after scoring a record 12.9 percent of the vote in last year's general election. The current conflict's fault line is between its leaders, who want the party to present a social-conservative profile and its youth organization, the SDU, who has pushed for a more radically nationalist line.

Among the members under investigation are people who are also affiliated with “undemocratic identity-based organizations such as Nordic Youth, anti-Semitic conspiration theorists as well as people who have expressed admiration for Adolf Hitler and so on,” according to Karlsson.

Both Hahne and Kasselstrand hit out at party leadership on social media on Tuesday, with Hahne referring to the alleged mass expulsion as “pure Soviet methods” and adding, “It is frightening that some of the people among SD's leadership has as their ambition to govern Sweden. Total lack of respect for democracy”.

And Kasselstrand wrote on Twitter: “Mattias Karlsson has orchestrated two chairperson battles against me and lost both. Now he responds by expelling me.”

Meanwhile, SD leader Jimmie Åkesson, who had been set to make a comeback to the helm of the party on April 1st after six months on sick leave for exhaustion, will not be taking part in any parliamentary work this week.

“It'll be a bit of 'one day at a time'. He's returning from an illness that you have to take seriously. You have to be careful,” press officer Henrik Vinge told newspaper Dagens Nyheter.