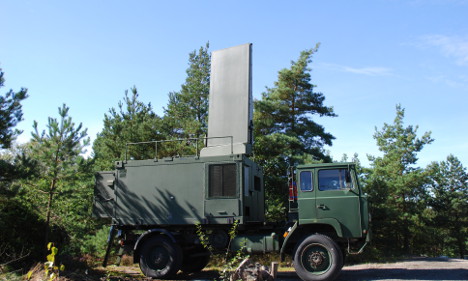 Saab's Arthur system. Photo: Saab AB
Saab announced the move in a press release on Wednesday, stating that it had received an order from the Norwegian Defence Logistic Organisation (NDLO) for a prototype of a mid-life upgrade of its current Arthur weapon-location system. The order amounts to approximately 115 million Swedish kronor ($13.3 million).
Arthur (Artillery Hunting Radar) is a radar system that locates enemy artillery fire and determines the weapon position with high accuracy. The Norwegian Army took Arthur into service in 1999, integrated to support light infantry brigades. It is also used by other European nations including Sweden, the UK, Italy and Spain.
The recent order includes upgrading the sensor to help improve the detection range and accuracy, increase the operational flexibility and provide mobility and protection.
“We are very happy that the Norwegian Forces take the step to the latest version of Arthur, which ensures the best possible radar for this application,” Anders Linder, head of Saab business unit Surface Radar Solutions, said.
The development and production of the prototype is set to take place at Saab's plant in Halden, Norway, and in Gothenburg, Sweden, and should be ready by 2017.
Arthur is already used in a range of different ways by various countries, from Counter Battery Operations and Fire Control of own artillery weapons to providing protection of own forces and civilians by suppressing enemy artillery weapons or providing a warning for incoming fire.
Saab is one of the world's leading defence and security companies and has around 14,700 staff around the world.
The company recently hit the headlines after it was initially excluded from a major new submarine-building programme in Australia.
The firm reported soaring annual profits in 2014 and forecast stronger arms sales this year in response to conflicts in Ukraine and the middle east.
It sells the Carl-Gustaf rocket launcher used by US armed forces and closed a 39.3 billion kronor deal with Brazil in October for 36 Gripen NG fighter jets on top of an existing 60-jet order from the Swedish government.
The Saab aerospace and defence company is not connected to Saab Automobile.

SUBMARINE
Mystery sighting in Stockholm archipelago was ‘not a foreign submarine’: military
Url copied to clipboard!