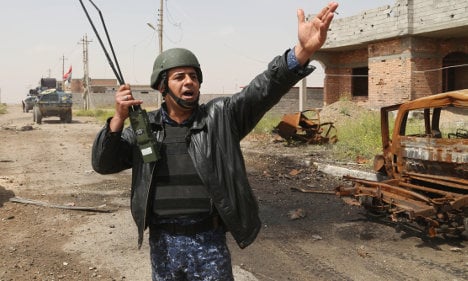 An Iraqi officer gives orders to troops fighting Isis north of Baghdad. Photo: TT
"In the first stage 35 soldiers will take part in the mission but the number can rise to 120," Wallström told news agency TT.
"Increased military support is needed now."
She added that the Swedish troops will provide "military advice and training… not combat units" and that they will focus on Kurdish peshmerga forces.
"We're responding to a request from the Iraqi government… they can need everything from weapons training to mine sweeping," said Wallström.
The Swedish forces are expected to be in place in June and will be under US command. No end-date for their participation has been announced.
The international coalition fighting Isis (also known as the Islamic State or IS) in northern Iraq includes Canada, Germany, the Netherlands, Denmark, Norway and Finland. It has been in place since August and has carried out airstrikes in Iraq and Syria.
Sweden first announced it would join the US-led coalition against Isis militants in Iraq in January, initially suggesting it would contribute 20 troops that would train Kurdish peshmerga soldiers stationed near the city of Kerbil in northern Iraq.
Thomas Hegghammer, a terror expert at the Norwegian Defence Research Establishment, told news agency TT earlier this year that the move could raise the threat level against Sweden.
“It could motivate someone to carry out violent acts to protest,” he said, adding that the more Isis is threatened on the ground in Syria and Iraq, the more likely the group os to to carry out terror attacks.
“There will be more attacks. We can already see a marked increase.”
Anders Thornberg, the head of the Swedish intelligence service Säpo has said that more than 100 Swedes have fought for Isis.
The move to send Swedish troops to Iraq comes as a new law to allow Swedish authorities to confiscate the passports of Swedes who are known to have fought alongside extremists in Syria or Iraq is being drafted by the government.
Sweden’s Home Affairs Minister Anders Ygeman has said he hopes the legislation will be passed by parliament and put in place by 2016.
“We can take care of passports so that a person cannot leave Sweden,” he told Swedish broadcaster SVT last month, adding that he felt it was “terrible” that some Swedish jihadists were currently travelling back-and-forth between the Nordic nation and the middle east.