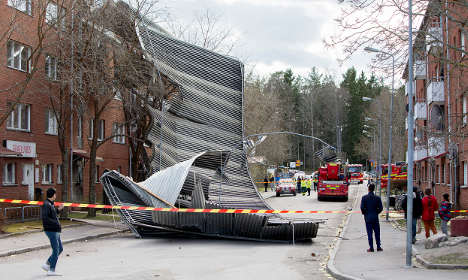 Nobody was injured when strong winds ripped a 70 metre long section of the roof from a building in Uppsala on Sunday.

“It was dramatic. The street is well trafficked and there's usually a lot of people out and about, both children and adults,” Michael Granqvist of Uppsala fire and rescue services told Swedish newswire TT.

Swedish weather institute SMHI issued warnings in south-eastern parts of Sweden on Sunday as winds hit up to 50mph.

Trains were cancelled on the Linköping-Västervik and Linköping-Kalmar lines due to the risk of falling trees.

In central Sweden, one plane was forced to interrupt its landing at Bromma airport in Stockholm and was redirected to Arlanda, according to Swedish public broadcaster SVT.

Later in the day, the storm moved north towards the regions Jämtland, Västerbotten and Norrbotten, which can expect more of the same on Monday.

“In northern Sweden, there will be very hard winds in the Jämtland and Lappland mountains,” SMHI meteorologist Eva Strandberg said.

Snow is also expected for large parts of the north, with up to 20 centimetres forecast for some areas.

“But on Monday during the day it looks like both Götaland and Svealand and parts of southern Norrland will have cloudy skies with sunny intervals,” said Strandberg.