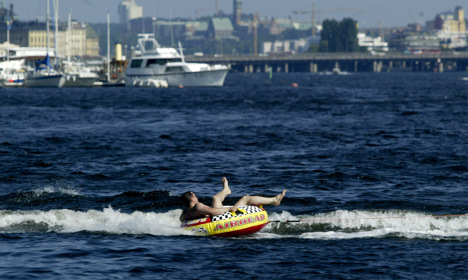 Stockholmers flock to the waterside in summer. Photo: Mats Andersson/SCANPIX

Stockholm Vatten AB is responsible for waste and drinking water in the Swedish capital. In 2014, it released 885 millions of litres of untreated toilet and dish water into Mälaren, the lake running through the city, reported local city paper Mitt i on Tuesday.

Normally, waste water gets pumped to one of Stockholm's two sewage treatment works. But at times of high rainfall, the pump stations sometimes overflow. To avoid flooding, Stockholm Vatten then releases the waste water via sewer pipes straight into Mälaren.

“Overflows can carry bacteria, nutrients and even environmental toxins. God knows what you flush down the toilet,” Anders Lundin at Stockholm council's environmental services told Mitt i.

“We will follow this carefully and demand that the company take measures to decrease the overflow,” said Lundin.

However, until work on a large new sewer pipe planned for 2018 is finished, Stockholm Vatten has requested permission to release even more waste water than at present.

“It has to be that way, because the alternative is that people get water in their basements and our opinion is that that would be much worse,” said Lars Lindblom, quality and environment officer at Stockholm Vatten.

Named Europe's first green capital in 2010, the waters around Stockholm are popular among locals and tourists alike for boating trips and even for having a swim on hot summer days. But according to Lundin, there is no need to worry about the water quality.

“No, but after very violent rainfall it might be good to be a little careful,” he told Mitt i.