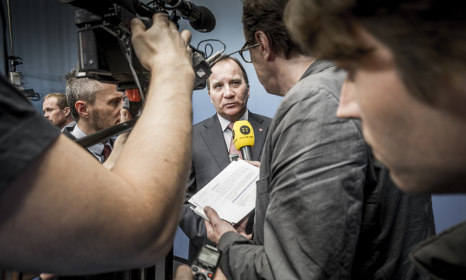 “There were not really any surprises there. Nowadays most of the proposals get revealed one at a time in advance to get maximum media coverage, so all the relevant points were already known before today. Possibly it came as a bit of a surprise that the government has boosted its growth forecast, but that's a minor detail,” he said.

The government estimates that Sweden's GDP will grow by 2.6 percent in 2015, up from its previous prognosis of 2.4 in January earlier this year. Although unemployment is expected to remain high, the government has revised its January forecast from 7.7 percent to 7.5 percent.

The supplementary spring budget, which is designed to reverse some of the policies the Löfven government pledged to follow in its controversial December Agreement with Sweden's centre-right Alliance parties, includes reforms amounting to eight billion kronor ($908 million).

“If you want to summarize it, it's a fairly traditional Social Democratic – and of course now Green as well – budget where you care for the welfare, by raising for example the cap on unemployment benefits and employing more workers in the elderly care sector. It's a symbolic 'reset budget' to bring back the social safety net of the last century,” said Bjereld.

READ MORE: Why Sweden is top in the world for expat families

But the supplementary spring budget was sharply criticized by most of Sweden's opposition parties on Wednesday.

“The correct headline for the budget that has today been put to parliament is a 'betrayal of jobs',” the centre-right Liberal Party's financial spokesman Erik Ullenhag told reporters.

“Instead of structural reforms we're seeing historically great tax rises,” he said and added that the raised taxes are the highest in Sweden in 20 years' time.

The nationalist Sweden Democrats and the Centre Party were also quick to voice their concerns. But the Left Party largely welcomed the government's budget proposal.

“It feels like Borg's [finance minister during the previous Alliance government] bitterly cold winter is finally over. A state budget should mirror the kind of society we want. That's why it's been so important to us to have more resources put into welfare,” said financial spokeswoman Ulla Andersson.

Löfven's Social Democrats formed a coalition with Sweden's Green Party after the general election in September 2014. But a political crisis was sparked when a budget put forward by the Alliance to rival the new government's (as is customary in Swedish politics) ended up getting more support than the coalition's offering, because it was also backed by the nationalist Sweden Democrats, who are kingmakers in the Swedish parliament.

Both the centre-right Alliance parties, the Social Democrats and the Greens struck a deal to ensure a similar problem would not happen again, titled the December Agreement. This included deciding that the current coalition should follow the Alliance's financial plan until it is free to present its own budget again next autumn, but also that the main opposition parties will let the government's budget through in the future.

The four Alliance parties were on Wednesday set to present their own, separate budget proposals instead of putting forward a common one, meaning that even if all parties vote for their own plans, the government's budget will still achieve a majority in parliament.

“The supplementary budget will go through, but the measures are still very small compared to the autumn budget, which will apply until the government can put forward its own budget next autumn. What's interesting is that it has marked the direction it wants to take in coming years,” said Bjereld.