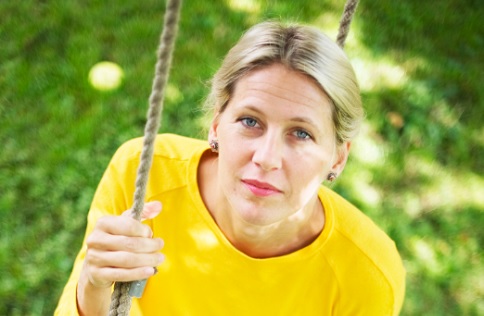 Abba still reigned, Volvo cars were taking over the UK and US markets, and Ingmar Bergman was still shocking and stunning the world with his films.

Blixt – whose surname means ‘lightning’ in Swedish – is the woman behind one such brand.

The mum of three and Swedish language teacher stumbled across 300 pairs of 70s-style wooden shoes on a trip back home to Skåne in 2006. She bought them all on a whim, and she has never looked back.

If the shoe fits

Today Blixt is the driving force behind Swedish Hasbeens, designing all-natural wooden clogs which she describes as “retro,natural and sexy”. And they just keep getting hotter in the fashion world.

“At first I was just selling the shoes I found to friends,” Blixt explains, sipping her coffee and sitting in a pink plush chair. “I didn’t have any experience in sales or fashion or design or anything. And then word spread and I had to start production.” Along with childhood friend Cilla Wingård Neuman, Blixt registered her own company and began designing leather-and-wood sandals inspired by the 1970s stockpile.

After purchasing the name ‘Hasbeens’ for a hefty sum – “it was taken by a club of retired Disney World workers in the US” – the company took off.

What started as a tiny webshop – where Blixt would personally walk to the post office and send off a pair of shoes after receiving payment – boomed into a Swedish shoe empire, taking in more than 50 million kronor ($6.3 million) a year with sales in 25 countries.

“It was always the idea to go international, from the very first pair of shoes,” Blixt says. Her blonde hair is pinned up on her head, her feet are stylishly encased in her very own leather boots, and her eyes sparkle as she gazes around the recently-opened flagship store in the SoFo district of Stockholm’s Södermalm.

She does resemble a Swedish retro queen, waltzing across the brown-and-beige checkered floors like something out of an Abba hit. But how did a humble little Swedish clog manage to conquer the world?

According to Blixt, it’s about a balance between values and sex appeal – but not the kind you may think.

“It’s interesting that Sweden has a reputation for being sexy – because we don’t dress sexy,” Blixt laughs. “We’re just naked a lot. Or at least we used to be; we’ve become more European in recent years.”

As opposed to the 1980s when Blixt and her friends romped topless on the beach, the entrepreneur says that Swedes prefer to stay clothed nowadays – but that the country still has a unique perception of sensuality.

“Sweden has a tradition of being very natural,” she explains. “All the scandalous Swedish movies are not about being sexy, they’re about sex, and being natural.”

Having an open dialogue about sex – and a healthy dose of Swedish sauna visits with your family – means that sex sexuality isn’t as hyped and dramatized as in some other cultures.

Blixt’s wooden shoes are not just ‘hasbeens’ because of the retro style – it’s also a comeback of retro Swedish sexiness – not the stereotype, but rather the truth. Outdated stereotypes of Sweden as overly sexualized have reigned for too long.

“I think it’s a misunderstanding,” Blixt remarks. “Sex is one thing, and a naked body is something else; it’s natural.”

“These shoes are sexy because they have just the right balance between feminine fashion and classic simplistic Swedish design, or ‘lagom’, as we say in Sweden,” Blixt explains, showing off a sandal with intertwined leather straps. “It’s a mix of natural materials, retro style, handicraft and modern fashion.”

All of Swedish Hasbeens' shoes – and their new bag, belts, and gloves as well – are made of ecological natural grain leather and wood. Made only with natural materials in good work situations, the shoes are sustainable, durable, and handmade – and according to their website, you could even bury the shoes in your garden without negatively affecting the environment.

“Our shoes are built on values,” Blixt says. “They’re fashionable and sustainable. And that’s hard to find. So it attracts a certain type of person around the world.”

Indeed, the 70s clog with modern flair turned out to be the little Swedish shoe that could. But Sweden alone could not support it.

“Sweden is very small, and it has a very small market for more niche fashion products,” Blixt says. “And the economy wasn’t great when we started, either. So it was critical to find our fans all around the world from the beginning, and as it turned, out they found us more than we found them through blogs and social media.”

Blixt said she knew the company had to go international in order to have any measure of success – and so she went for it.

The challenge of connectivity

The company’s first international sale arose from a trip to Italy, where Blixt and Neuman persisted until they convinced an Italian fashion agent to carry the shoes.

They then attended the World Shoe Association (WSA) MAGIC fair in Las Vegas – “although we couldn't afford it” – and luckily, the shoe became a hit.

“I sat by the pool in my red clogs, and a couple came up and said, ‘Oh my god, I love your shoes.’ And it turns out they were shoe agents,” Blixt recalls.

Suddenly Swedish Hasbeens were being sold on Amazon, at Free People, and then in Anthropologie, Urban Outfitters, and retailers across the globe.

Read other interviews about Sweden's place in the world

As co-founder, creative director, and production manager of the company, Blixt has become an ambassador of sorts not just for Swedish Hasbeens, but for Swedish creativity.

“I fly to London and Paris once a year, Berlin twice, Italy four or five times, and the US a couple of times per year,” Blixt states. “When travelling to the US you have to book really, really early… up to a year before, even, to get good flights. I just try to book way ahead of time for good direct flights.” But it’s a small price to pay to play on the international market.

“Sweden is a very small country, and if you have a niche product then it’s not enough to stay in Sweden,” Blixt says. “The new generation of Sweden thinks international directly. Just look at all the successful start-ups.”

And that’s Sweden’s secret – a bit of style, a bit of sex, and sights set on the wider world.

“We are actually raised to be creative in Sweden, and it’s easy to start a company here with our free education, access to social security, funding and young people who dare to think big,” Blixt reflects. “People learn to dare and believe in their ideas, and that is our hope for the future.”