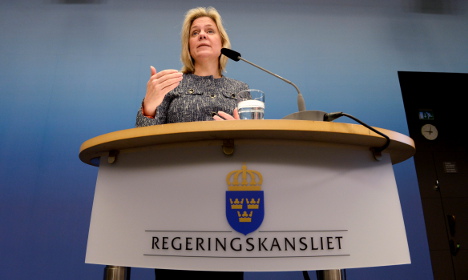 09:53 The press conference with Sweden's Finance Minister Magdalena Andersson has now ended. We will continue to bring you any important updates and reactions to the government's spring budget throughout the day.

09:45 The Swedish government's financial prognosis will put pressure on the Riksbank (Sweden's Central Bank), experts are already saying. The government predicts inflation will remain at 1.5 percent in coming years, lower than the Riksbank's 2 percent goal. "I think that the Riksbank will need to revise its prognosis and we share the government's assessment. It means that the Riksbank will need to keep pushing an expansionary policy. It's important then who takes responsiblity for ensuring new problems don't emerge, and I haven't found anything new in the budget on that point," Annika Winsth, chief economist for Swedish banking giant Nordea has told news agency TT.

09:37 The government wants to raise the cap for unemployment benefits, raise child support by 300 kronor ($34) a month per child and one billion kronor investment to employ more workers in elderly care.

09:35 The Finance Minister tells reporters that Sweden needs to invest in a more 'climate smart' society.

09:32 In the area of education, the government wants more childcare workers and smaller groups of children in schools.

09:30 Sweden's jobs push will focus on investing into business and education. The government aims to create 6,500 new places in higher education and adult vocational training.

09:26 Andersson tells reporters the budget will focus on jobs, schools, a sustainable environment and ensuring the future of the Swedish welfare.

09:10 Andersson tells reporters that the Swedish government predicts strong economic growth in the rest of the world in coming years, but says that high unemployment of 11 percent in many parts of Europe and eight percent in Sweden, as well as low inflation, presents challenges. Sweden's GDP is expected to rise, but higher employment and investment is needed, says the Finance Minister. She calls for more investment into education, infrastructure and housing.

09:00 A press conference with Finance Minister Magdalena Andersson is underway.

07:50 The Social Democrat-Green coalition is scheduled to announce fresh economic policy guidelines alongside a new economic forecast for Sweden at 9am. Here's a reminder of what we know so far:

In Sweden, all governments have the chance to to revise their annual budget each spring, to adapt to events or economic changes that have emerged since the start of that year. But this year’s spring budget is especially significant because Prime Minister Stefan Löfven and his team have until now been following a budget put together by the four centre-right parties that make up the opposition Alliance, following a political crisis last autumn. The deal was struck in order to avoid a snap election in the Nordic nation.

She is also expected to raise the government’s economic forecast having previously predicted growth of 2.4 percent this year and 2.7 percent in 2016.

Political experts are split on how radical an impact the new budget will have.
"The Red-Green government can use this 'additional' budget to try and gain some more influence over national policy, although I don't see any major changes happening as a result of this," Ulf Bjereld, a politics professor based at Gothenburg University told The Local in January.
But other experts believe this could be a more pivotal moment for the coalition.
"Come the spring we could effectively see the delayed implementation of the government budget that didn't get through this autumn. Things could change rapidly," argued Nicholas Aylott earlier this year.

Sweden's political crisis that emerged in late 2014 because the Alliance put forward a budget to rival the new government's (as is customary in Swedish politics), but this ended up getting more support than the coalition's offering, because it was also backed by the nationalist Sweden Democrats, who are kingmakers in the Swedish parliament.

Both the centre-right Alliance parties, the Social Democrats and the Greens struck a deal to ensure a similar problem would not happen again, titled the December Agreement. This included deciding that the current coalition should follow the Alliance’s financial plan. In future if it looks like a future government budget won't get enough support, then the main opposition parties either won't vote for or won't put forward a rival budget (leaving the Sweden Democrats' vote irrelevant).