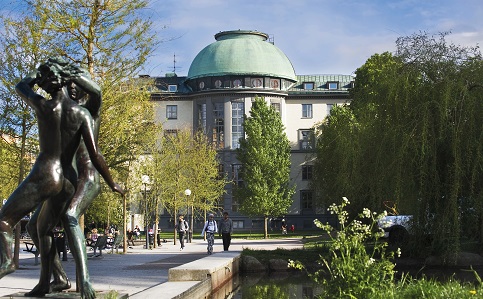 When Swapnil Chitre’s employer offered him the chance to work in Sweden for two years, he took it. Having lived in big cities like Mumbai, Tokyo, and New York, he was curious about working in a smaller city.

But he had no idea how much the move would end up changing him.

“I just thought I would give it a try for two years,” Chitre tells The Local. “And now two years have become ten.”

Chitre works at Extenda, a company offering a state-of-the-art Point of Sale and store management system for retailers.

“I had been working in the technology stream for a long time, and when you’re into IT you’re competing in a global environment,” Chitre says, explaining that work frequently sent him home to Mumbai and to the US.

“There was a lot of talk about MBA degrees and the value that they bring,” he says. “And at the same time I was thinking about taking more responsibility in the company, new opportunities and areas I could take ownership of.”

The only problem was that Chitre had no business education.

But he was living in Stockholm, the city which is home to the best business school in the Nordics.

“I decided to go for an MBA, and I wanted to do it at a top school. So it was a no-brainer.”

Chitre applied for the competitive SSE MBA Executive Format, a rigorous 18-month programme that aims to provide participants with the confidence and skills to understand every aspect of their business and take on new responsibilities. It’s not an easy path.

“A lot of the students who start thinking about their future career and maybe doing an MBA don’t know what they’re looking for,” Pernilla Petrelius Karlberg, one of the SSE MBA programme directors, tells The Local. “But they think they can do more, and they know they want more. It’s a very brave decision.”

The programme applicants are diverse, coming from many different countries and professions. But there’s one thing everyone has in common: ambition.

“It’s a group of very ambitious and competitive people. They don’t know who else will be there, and they are usually impressed and inspired, but also intimidated. A medical doctor may end up sitting in an accounting class with a bunch of CFOs, and is expected to catch up and contribute.”

Indeed, Chitre found himself in a group of CFOs, CEOs, IT managers, marketing executives, entrepreneurs, and more.

“I had no background in finance and there I was sitting in a finance module with CFOs and business controllers,” Chitre recalls. “It was challenging. In certain modules you have to put in extra effort to stay up to speed with the rest of the class.”

And that’s just one of the challenges. The 18-month Executive MBA includes 10 classroom weeks, international field trips, evening activities, and extensive self-study. The programme is combined with working full-time, and applicants must thus have cleared the programme with their employers – and figured things out with family – first.

“Many of these people are right in the middle of life, and have demands from work, partners, and kids,” Petrelius Karlberg says. “To be able to handle this, to not disappoint people but still have the courage to put your foot down and acknowledge that life must go on without you…it’s very scary.” But the benefits, should one choose to take the jump and invest in personal development, are boundless.

“It was fantastic,” Chitre exclaims. “Everyone in the classroom was a high achiever looking towards taking the next step.”

Specifically, Chitre says he has learned to think “more holistically” in terms of business operations, considering all aspects of a problem before finding a solution.

“You have the basic frameworks and tools in place and you can explore them, and all of that helps overall in your career,” he says. “Now I can take on more opportunities and challenges, and expand the current business into new areas. It gives you so much more confidence.”

That confidence has given Chitre’s career an unbeatable boost, and today he leads two departments within his company, and his new responsibilities include doing business negotiations with other countries in order to develop new products.

“Before I just did technology and software,” he says. “I would have never been able to do justice to the role I have today, or even get the role in the first place, if not for the MBA. There are so many things I learned in the programme that I apply in my day-to-day business.”

Petrelius Karlberg, who has been working with the MBA programme since 2012, says that she herself has grown through her participation and watching her students grow.

“I was totally blown away by the enthusiasm and power in my first group,” she says. “It’s quite different from teaching undergrads. Their thirst for knowledge is so genuine, and though there is a lot of frustration, I get to see them become better people and better managers.”

But it’s not all about business.

For many, the network provided by the programme is just as priceless. After almost two years working together on projects and assignments, participants find they have closer bonds.

“A lot of people in our class benefited from the network, in terms of opening up possibilities for doing business together,” Chitre tells The Local. “It’s a high-caliber network covering the entire globe.”

Before the SSE MBA, Chitre adds, his circle of friends in Sweden consisted mostly of other Indians.

“Typically when you move to a new country you tend to hang out with people from your own country,” he says. “That was the case with me prior to the MBA. But it’s so much more fun having a global circle of friends. I have a lot more friends now; friendships that will last a lifetime.”

And while the courage to join the programme changed his life, he admits that the Executive MBA isn’t for everyone. For those considering the programme, Chitre says to look ahead to the future.

“Think about what you want five to ten years down the line. Think about the consequences of not doing it.”

Petrelius Karlberg agrees, promising that those who enroll in the programme will discover a world beyond their comfort zones.

“It’s about exposing yourself to things you haven’t experienced before,” she says.

“There are new subjects students may not have done before, like finance and strategy, but they are also exposed to other practices they may not be familiar with, like improv theatre and meditation. You have to be very present.”

At least you have to be willing to try.

“You might only do something once, but do it 100 percent,” she advises.

This article was produced by The Local and presented by Stockholm School of Economics.