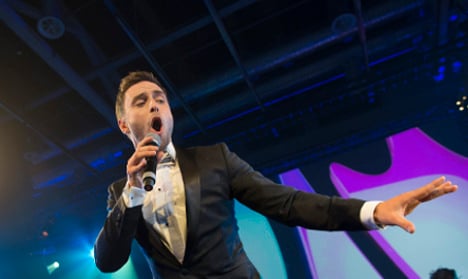 Måns Zelmerlöw, who won Sweden’s televised prequel to Eurovision, Melodifestivalen, is taking his track ‘Heroes’ to Austria next month.

The song has already become a huge hit in his own country and numerous music experts, including The Local’s Paul Connolly have speculated that Sweden has its best chance of winning Eurovision since Abba took the crown in the 1970s.

Sweden’s Eurovision delegation announced on Monday that “three boys and two girls” will accompany Zelmerlöw in Vienna. Unlike in Melodifestivalen, which allows prerecorded backing tracks, all performers at Eurovision must sing live.

This year's choir will include Britta Bergström, who previously accompanied Sweden’s entry Loreen, Jeanette Olsson who sang with another competitor, Sanna Nielsen in Copenhagen in 2014 and Michael Blomqvist, who is a lead singer at Sweden’s open air museum Skansen, which hosts summer sing-along events. The two other backing stars are Linnea Deb and Alexander Holmgren.

It remains unclear if Måns Zelmerlöw will also be accompanied by sign language interpreter Tommy Krångh, who was seen by many to have stolen the show during the Melodifestivalen final with his emphatic gestures and dance moves for rival contestant Magnus Carlsson.

After a video of him performing in the contest went viral last month, he told The Local that there was a chance he could be heading to Vienna.

“I have heard that people in Sweden have said that I should go with or instead of Måns. But I think he is going to do a very good job. If I go to Eurovision it will be as a signer and I have had some conversations about this, so it is a possibility,” he said.