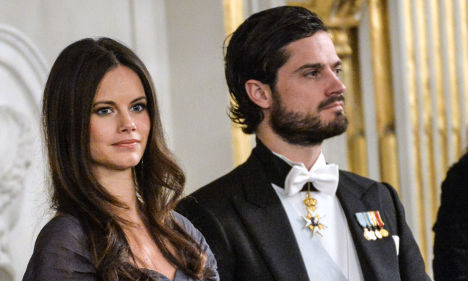 The royal couple pictured in December 2014. Photo: TT
Invitations wrapped in orange satin ribbon have been posted to royals, politicians and celebrities from across Europe, according to Swedish newspaper Aftonbladet, which has published a list of guests.
Those expected to join the Swedish royal family at the Royal Chapel in Stockholm include Prince Edward and his wife Sophie, Countess of Wessex from the UK, Danish Queen Margrethe and her husband Prince Henrik and Norwegian Crown Prince Haakon and Crown Princess Mette-Marit.
Among the friends of the couple understood to have been invited are Marwan "Marre" Hitti, Sofia's hairdresser from her time on the reality television show Paradise Hotel and Louise Gottlieb, a long-term confidant of Princess Madeleine.
The paper suggested that further attendees would be announced in the coming months. The Local has been unable to confirm the leaked guest list with the Swedish Royal Court.
The wedding schedule will get underway on Friday June 12th, when the couple's friends and family will be invited to a private evening dinner, a statement from the court revealed last month.
The following day, Saturday June 13th, a legally binding church service will take place in the Royal Chapel at the Royal Palace in Stockholm, starting at 4.30pm. The royal couple snapped in November 2014 at the Nobel prize ceremony. Photo: TT
After the ceremony, the bride and groom are set to take part in a horse and carriage procession around Stockholm, passing through areas in the city centre including the island of Skeppsbron and Regeringsgatan, Nybrokajen and Logården in the capital's old town (Gamla Stan).
When the couple arrive at Logården they will be greeted by a 21 gun salute by Sweden's military. This will be followed by a military parade in Stockholm.
The royal family is then set to host a banquet for guests, followed by dancing in Karl XI's Gallery in the Royal Palace.
In a statement published on the Royal Court website last week, it was announced that the royal wedding will be officiated by the King’s chaplain Lars-Göran Lönnermark and Pastor Michael Bjerkhagen.
Both clergymen also officiated at the wedding of Princess Madeleine and Christopher O’Neill, who married on June 8th, 2013 in the Royal Chapel.
King Carl XVI Gustaf, crown Princess Victoria, Prince Carl-Philip, Princess Madeleine and Princess Estelle were also baptized in the church.
Hellqvist, a former fashion model who famously participated in the scandalous TV series Paradise Hotel, has dated the Swedish prince since January 2010.
The couple met in 2009 at a club on Stureplan in Stockholm. They have lived together on the Stockholm island of Djurgården since 2011.
Aftonbladet retracted the guest list early on Thursday. Royal Palace press officer Margareta Thorgren told Swedish media magazine Resumé via text message that the guest list was inaccurate and had been removed by Aftonbladet on the Royal Palace's request. She said: "They have probably compiled this list based on previous guest lists. We have not published any guest lists." All other wedding-related details in The Local's article were correct at the time of publication.