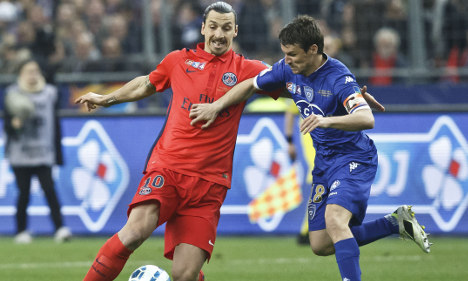 Both were punished for tirades aimed at referees which were shown by Canal Plus. As a reprisal, PSG and Marseille say they will not answer the station's questions after games or at press conferences until the end of the season.

Canal Plus deputy director general Maxime Saada told the newswire AFP that the channel had become a "hostage" between the clubs and league disciplinary judges because of film taken around the Ligue 1 matches.

He said this was "stopping our teams of journalists from carrying out their jobs."

Zlatan Ibrahimovic was hit with a four match ban after he was hit out at refereeing decisions a game against Bordeaux in which PSG lost despite his two goals. The striker appeared to insult a match official as he left the field.

He ranted: "In 15 years, I have never seen such a referee. In this shit country, this country does not deserve PSG. We are too good for this country."

Amid a political furore, Ibrahimovic quickly made a video apology for the comments insisting he likes his adopted nation.

French international Payet was banned for two matches for shouting at the referees room that Marseille had been "screwed" after a goal was disallowed in their 0-0 draw with title rivals Lyon.

If the CNOSF quickly decide to appoint a mediator, Ibrahimovic's sanction would be suspended and the Swedish forward could return to the pitch while awaiting a final decision.

The mediator can decide to confirm the sanction, propose a different sanction or send the player before a disciplinary commission.

PSG are still in the running for an unprecedented four trophies after winning the League Cup last weekend, and Ibrahimovic's absence would be a blow to their chances.

The Ligue 1 champions already take on Barcelona in the Champions League on Wednesday without him after the tempestuous striker was suspended for his sending off against Chelsea in the last 16.