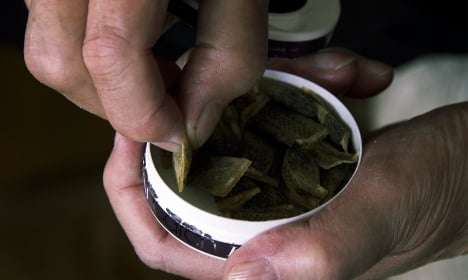 The centre-left political majority in Uppsala county in central Sweden revealed on Thursday afternoon that it was going to revise the original proposal after a massive debate, which even prompted the leader of the national Left party to step in and decry the bid.

“If you try to forbid and regulate everything you do not like, we will end up having an unbearable society,” Jonas Sjöstedt told Swedish news agency TT.

The Social Democrats on the Uppsala county council board quickly backtracked on the proposal after it faced huge public opposition when it was revealed by Swedish Radio earlier on Thursday. It will now work with its Left and Green party coalition partners to revise the bid.

“The way [this proposal] has been phrased is unfortunate. It is nothing we are going to back. On the preparatory committee the wording has unfortunately not caused any greater discussions,” councillor Vivianne Macdisi told TT.

According to the proposal, the smoking ban already in place in council buildings would be extended to also include the smell of the popular Swedish snuff. Patients or visitors to hospital would also not be allowed to smell of snus. The proposal would also include public transport bus drivers.

“The wording [of the proposal] is that you should not expose others to the smell of smoke and snus,” said Left party councillor Sören Bergqvist.

Snus (pronounced a bit like the English word 'snooze') is Sweden's most popular tobacco product. It can be bought loose or in small teabag-like parcels that are placed under the lip. While it since 2005 has been illegal to smoke inside restaurants in Sweden, snus has enjoyed a rise in popularity in recent years, with 21 percent of Swedish men using the powdered tobacco, compared to in 1989 when the corresponding figure was 17 percent.

The top market for snus is unsurprisingly Scandinavia, while the EU has consistently voted to maintain a 1992 ban on exporting the product to the rest of Europe, despite speculation a few years ago that it could be brought into countries like the UK and France following the introduction of smoking bans in public places.

Two years ago, tobacco firm Swedish Match won the right to use aroma additives in the product, after European parliamentarians voted to scrap a proposal that would ban flavoured snus.