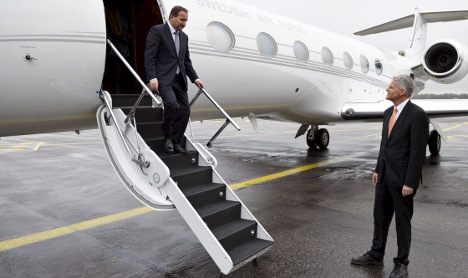 Swedish military pilots have flown government planes between Arlanda and Bromma to pick up ministers on at least six occasions since Stefan Löfven became Prime Minister last September, a military spokesperson confirmed to The Local on Thursday after the story was broken by the tabloid Expressen.

Henrik Gebhardt, head of public affairs for Swedish military unit Skaraborg Wing, told The Local that there were "many, many reasons" why the Swedish military sometimes needed to fly between the airports, although he accepted that time pressures "could possibly be one consideration".

The distance between the two airports is 41 kilometres and the average journey time by car is about 30 minutes. Expressen has suggested that each flight could cause carbon dioxide emissions of nearly five tonnes.

The ministers' movements are especially controversial because local Social Democrat party politicians in the Swedish capital have been fighting to close Bromma, which is closer to the city centre and is a hub for domestic flights, with links to thirteen destinations.

The Social Democrat councillors have questioned the environmental impact of the airport and suggested that the land could be better used to build new apartment buildings, as Stockholm continues to experience a major housing shortage. However the Prime Minister has not publically backed the idea.

Both national and local Green party politicians are in favour of closing Bromma by 2022. On Thursday it emerged that its co-leader Gustav Fridolin was among the ministers who had been picked up by a plane after it had made the swift flight between the airports.

He told Swedish newspaper Aftonbladet that he had been made aware a government plane had been flown to Bromma to collect him ahead of a summit in Brussels in December 2014, but that he had not been told at the time.

"I would have showed up at Arlanda if they had asked me," he said.

"Whether it's Säpo (Sweden's Security Service), the military or a mate who offers me a ride, I tend not to question the parking lot, I just show up on time at the place they told me to go to," he added.
Swedish ministers have access to two government planes, one larger aircraft based at Arlanda and another at Bromma.
"I should be clear that nobody gives us a direct order about which plane to use," Gebhardt told The Local.
"We [the military] decide which aircraft is most appropriate based on the needs of the customer. The planes are somewhat different sizes and the one at Arlanda can fly further, so that is a factor," he said.
He confirmed that other issues such as maintenance work or one aircraft being temporarily unavailable also played a role.

According to Expressen, occasions the government planes have made short journeys between Arlanda and Bromma include a flight ahead of a trip to Brussels in October 2014 and before a flight to New York for a United Nations meeting.

The Local has contacted Stefan Löfven’s office for comment.