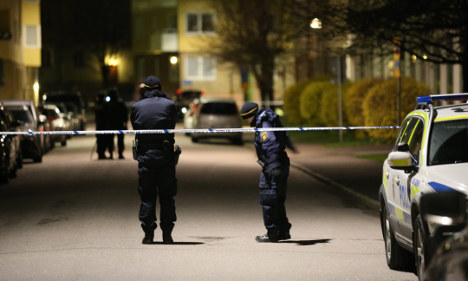 Four men in their twenties have been arrested following the latest shooting and are being held by police on suspicion of murder and aggravated assault.

Officers were called to an apartment block in Brämaregården at around 9.30pm on Wednesday and found the victim, who was alive but had been seriously injured in the shooting. The man, who is in his fifties, died in hospital on Thursday morning.

Police have been carrying out a forensic investigation around the property. Officers have said that the suspects showed clear signs of drug abuse, when they were picked up.

READ ALSO: Sweden has had gang problems since the 1990s

The attack took place around five kilometres away from another deadly shooting at a restaurant in Hisingen in March. Two people died and eight others were injured following the incident in the Biskopsgården suburb and the event sparked a national debate about gun crime in Sweden's second largest city.

While there have been dozens of shootings involving criminal gangs in Hisingen in recent years, fatalities are relatively rare.

Police have yet to comment on whether the two shootings could be linked.