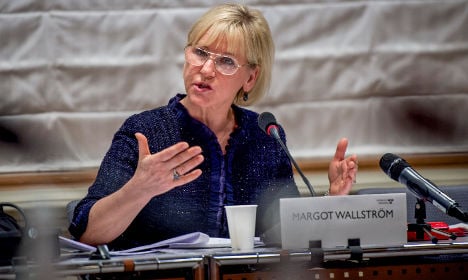 Sweden became the first western EU country to recognize Palestine in late October last year, causing an outcry in Israel and prompting it to recall its ambassador to Stockholm.

But Foreign Minister Margot Wallström faced tough questions on Thursday, after the parliamentary committee on constitutional affairs (Konstitutionsutskottet – KU) launched an investigation into the political process leading up to the recognition of Palestine.

Prime Minister Stefan Löfven's Social Democrat-Green coalition government is accused of making the controversial decision without informing the parliament's foreign affairs committee, as is the customary practice in Sweden.

But Wallström told members of KU on Thursday that everything said by herself and the prime minister ahead of the government's formal decision should only be interpreted as declarations of intent.

"The process has been correct and proper," she said and added that it cannot have come as a surprise to other parties that the Social Democrats and the Green Party intended to recognize Palestine after they made a lot of noise on the issue in last year's election campaign.

KU raised questions about Löfven's inaugural speech at the opening of parliament on October 3rd, in which he in one section explained "why Sweden is going to recognize Palestine".

On the same day, letters sent to Swedish embassies around the world stated “that the State of Palestine since 2012 enjoys a status of non-Member-Observer-State in the UN, that 138 states have voted in favour of this, including Sweden, that approximately 130 states recognized Palestine as well as that the recognition of Palestine was in accordance with international law”.

The Swedish government is obligated to keep the parliament's foreign affairs committee informed of important foreign and security political developments. But the committee was only told of the government's decision on October 27th, three days before the formal announcement.

However, Wallström told KU on Thursday that Löfven's speech and the letter sent to Swedish embassies earlier in October did not mean that the decision to recognize Palestine was already a fait accompli.