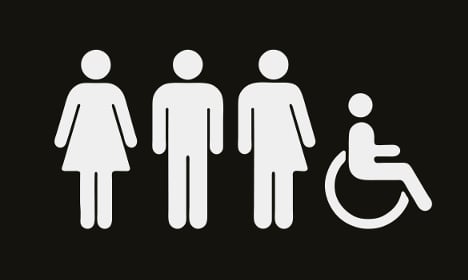 Pompe Hedengren, creative director of design studio Stockholm Graphics, presented the concept to his company's client, Sigtuna Museum, just outside Stockholm, who jumped at the idea.

“I haven't designed the sign, but I went online to look for symbols for transgender people. I think it's great – it's a fantastic symbol, simple, cool and inclusive. We want people who have a different gender identity to feel welcome at the museum,” Hedengren told The Local.

The sign shows an image of the usual symbols – a woman with a skirt, a man in trousers and a disabled person in a wheelchair – outside the unisex toilets at the museum, as well as a gender neutral symbol of a figure wearing half a skirt, to include people who define themselves as LGBT (Lesbian, Gay, Bisexual and Transgender).

“It's interesting to use this symbol especially at a museum with historical exhibitions like Sigtuna because it's important to understand that LGBT has existed in all times, it's not something that was invented in Los Angeles in the 1980s. It would be interesting if the sign could perhaps make visitors think about questions such as 'what was it like to be gay in the Viking Age or transgender in the 1500s?'” said Hedengren.

But the signs have faced mixed reception in Sweden, known for its gender equality and tolerance.

“We've had strong reactions, with some people commenting that it's 'fantastic' and others saying it's 'idiotic'. Many get provoked by people who aren't clearly divided into 'women' and 'men', but the reality is that there are many who don't feel at home in either of these categories," said Hedengren.

"I don't want to get rid of heteronormative people's toilets – we're adding a symbol, not removing anything. But it's interesting that people feel so threatened even when there's nothing threatening them," he added.

It is not the first time Sweden's approach to gender neutrality has created divisions on home turf. The new gender neutral pronoun 'hen' made headlines when the Swedish Academy announced last summer it was to include it in its new dictionary, which was released this month.

In March, a campaign by transgender activists to cover public toilet signs with stickers as part of a move to make more toilets in Sweden gender neutral sparked debate.

Hedengren hopes the Sigtuna Museum concept will be an inspiration for other buildings.

“I hope that it will spread and it's great that I as a designer can help transgender people to feel safer in public environments,” he said.