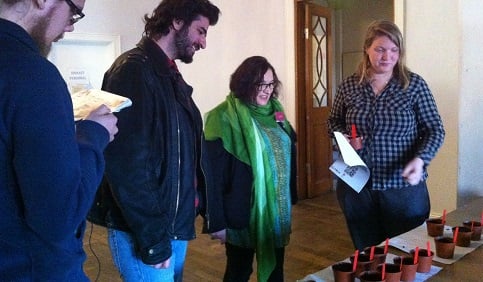 Tell me more about yourself. What is your background?

My name is Sornnimul Khut, and I come from Cambodia. Luckily I, got a scholarship from SI to study in Sweden. And currently I am doing a Master in social science, Digital Media and Society, at Uppsala University.

Currently I am doing one of the courses called Sustainable Development. And we came up with an idea to work on this project called Syrian Refugees Activity Project.

Where did the idea come from?

Actually this idea comes from one of the team members, a Swedish student Avesta Miraz, who is staying in Västerås nearby. Her mother works with refugees and she got a chance to talk to her mother about it, and after that we got some ideas from them and worked together to see if we could work with the refugee home.

Why did you want to get involved?

There were several good projects that the students in our class came up with, but I decided I wanted to be a part of this project because I really want to help these refugees. They have lost their families, relatives, homes, and come here. Really help them to integrate into Swedish society and bring some light into their lives. Instead of leaving them sitting in the refugee home doing nothing. So that’s why I am part of the project.

So what exactly is the goal of the project?

We want to help refugees at the Västerås refugee home to integrate into Swedish society, and set a standard for other refugee homes, set the standard higher. We talked with some of the refugees and they don’t have any activities at all during their days. They get up, have breakfast, have dinner… They do nothing.

Psychologically, when people don’t have anything to do and have left their country and have had relatives die, they feel hopeless. So the purpose of the project is to bring some light for them, and try to do something.

We had an event yesterday. Yesterday we hosted a charity event at the Östgöta Nation at Uppsala, and surprisingly we got a lot of very positive response. We got a lot of donations from people, clothes for men and women, fabrics, boardgames, toys, and more. We also got responses from people on Facebook who said they couldn’t come that day, but that they had stuff we could pick up somewhere else.

What about the response from the community?

We have had a lot of friends and people offer materials, not just yesterday. And we have also been emailing a lot of companies asking for donations, and gotten a few so far.

In the future we are planning on hosting two events at the refugee home.

The first one is an arts and crafts day, so we will bring painting materials, so they at least can have something to do. And they can express their feelings through painting.

And on the second day we are planning to do some sort of gardening, teach them how to do gardening and have the tools there for them. We are also trying to get a company to help us with a greenhouse, but we might need to build our own greenhouse, 60 metres square…so they can grow something there. What is the key message you wish to get out to the world?

The key message is that first, it is important that we help those who are in need. They have lived in war and now they managed to come here; we can at least try to help. Whether big or small we can contribute.

And secondly, we have learned that some refugee homes will not do their best to help people. We cannot start this initiative too early, to set a standard for other homes to really take this seriously, take this into account.

How will this project and experience affect you and your future?

I am from Cambodia, and the governments of Cambodia and Australia are signing an agreement to send back Cambodians who have been living in Australia for 30 or 40 years.

I think this could be a chance for me to help refugees and get some experience and go back and help those Cambodian refugees coming back from Australia.

Part of the problem is that some of the Cambodians are not really integrated into Australian society, so they want to send them back. And that’s why I am really into this project. If the Syrian refugees do not integrate into Swedish society they are more likely to be sent somewhere else, become refugees again.

But it sounds like it has been a very positive project so far, right?

Yes. During the donation day there was actually one woman who appeared to be Muslim, and she donated a lot of nice clothes and money. We suspect that she could be one of the former refugees coming from Syria or some other place. And we were surprised she came and donated to the project. It provided us with a lot of encouragement to keep working, we feel very positive about it.

Are you interested in getting involved and showing your support for the Refugee Activity Project? See the Facebook page here or make a donation.