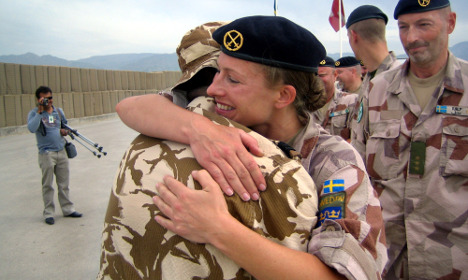 Swedish soldiers on a mission in Afghanistan. Photo: TT
The deal was struck on Friday after a more than ten days of tense negotiations.

The Moderate, Christian Democrat and Centre parties reached an agreement with the government to increase defence spending by 10.2 billion kronor ($111.9 million) between 2016 and 2020.

Earlier this month Sweden's Defence Minister Peter Hultqvist announced plans to give Sweden's military a six billion kronor boost.
The deal struck on Friday follows strong criticism from the centre-right opposition Alliance parties that this was not a large enough sum.
The new agreement of 10.2 billion kronor still needs to be approved in parliament, but is guaranteed enough support following the cross-party talks.
Speaking at a press conference to announce the deal, Defence Minister Peter Hultqvist said that Sweden's interests were at the "centre" of the agreement.
He said that the money would be spent on initiatives including expanding Sweden's anti-submarine warfare capabilities and establishing a permanent military presence on the island of Gotland from 2018.
The minister also confirmed that Sweden was investigating a "partial" return to conscription. Sweden's Defence Minister Peter Hultqvist announcing the deal. Photo: TT
Sweden's defence capabilities have been questioned following increasing military activity from Russia in the Baltic region.
In October 2014, a foreign submarine — suspected to be from Russia, although this was never confirmed — was spotted in Swedish waters just outside Stockholm.
A number of Russian planes have also been spotted in or close to Swedish airspace over the past year.
Sweden has recently revealed it is planning closer military cooperation with both Finland and Denmark, but it has so far ruled out joining Nato.

Friday's deal was met with some criticism from defence experts who believe that Sweden's centre-right parties should have fought harder for even higher spending.

“10.2 billion for defence is good. Now we just need 29.8 billion more for our defence to work for a week,” wrote political scientist and security analyst Stefan Olsson on Twitter.

His comments refer to an interview in Swedish newspaper Svenska Dagbladet in January in which Swedish Supreme Commander (SC), Sverker Göranson, said that Sweden could only defend a limited part of the country for a week, if it was attacked.

The Liberal party —  which dropped out of the latest negotiations because it was in favour of even higher spending — said the new cross party deal could come back to bite the coalition.

"The money is enough to clog some of the holes, but other holes will continue to leak," said its negotiator Allan Widman.

"This does not amount to a strengthening of Sweden's defence capability," he told the TT newswire.