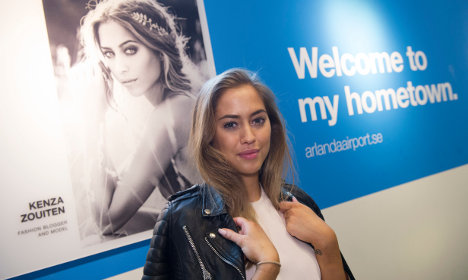 Fashion blogger Kenza Zouiten is one of the new faces. Photo: Fredrik Sandberg/TT

Royals, designers, athletes, artists, businesspeople and fashion icons are among the faces welcoming travellers at the airport. 60 of the 93 celebrities were replaced by new portraits this week in the gallery, which was inaugurated in 2006. Their portraits and the greeting “Welcome to my Hometown” will meet tourists and other travellers when they arrive in Sweden.

“Stockholm Arlanda Airport is a window to the world and the airport is the first thing our foreign visitors are met by. Arlanda is an important meeting place with more than 20 million visitors a year and it is an excellent arena for promoting the city and the country,” Swedavia market director Michael Persson Gripkow said in a statement.

The idea is for the gallery to reflect the contemporary icons of Sweden, but it has not been updated since 2006.

“Stockholm Hall of Fame will now become a more modern and alive gallery where new famous Stockholmers will welcome people by giving them a personal picture of the city and what it stands for. We hope that the portraits are going to inspire our visitors and make them curious of Stockholm as early as at the airport,” said Persson Gripkow.

Swedish television personality Yankho Kamwendo, who is one of the new faces in the Hall of Fame, told regional newspaper Upsala Nya Tidning that he was excited to represent the capital.

"It is a fantastic honour to represent the city you live in. It's a delighful mix of people too," he said.