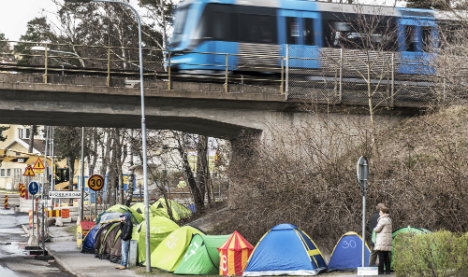 A housing queue protest in Stockholm in April 2015. Photo: TT
While the chronic housing shortage in Swedish cities is a perennial headache for newcomers, Sweden's youth leave home earlier than any other comparable group in Europe, according to new figures from Eurostat.
Swedish women on average fly the parental coop when they are 19.3 years-old, while men follow closely behind at 19.9-years-old – an average of 19.6 years.
This figure puts Swedes out front in Europe especially when compared It gives Swedes a leading position in Europe – especially when compared with Croatia (33.7) and Slovakia (32.1), according to europaportalen.se.
Furthermore the trend in Sweden is towards an earlier departure from their childhood with the average dropping from 20.7 for women and 21.6 for men in 2011.
The figures surprised researchers familiar with the debate about long waits for elusive apartments.
"I was a little surprised at the numbers. But targeted housing investments have begun to emerge from, for example prperty companies," said Cecilia Enstrom Öst at the Institute for Housing and Urban Research at Uppsala University.
Enström Öst explained the situation in that not all young people live in the bigger cities, when housing queues are at the most onerous, and the expansion in higher education.
"Pretty much everyone goes to university today, if one is to generalize and compare historically," said Cecilia Enstrom Öst.
Students are also largely less discerning when selecting an abode.
"I have looked at the importance of the condition of the property. When you want to study the only important thing is to be able to get hold of somewhere to live, regardless of size or standard," Enstrom Öst said.
The Eurostat statistics clearly show that women are consistently – in all EU countries – younger than men when they leave home. The smallest gender gap is found in Sweden. The difference is greatest in Romania and Bulgaria, where men live at home 4.5 years longer than women.