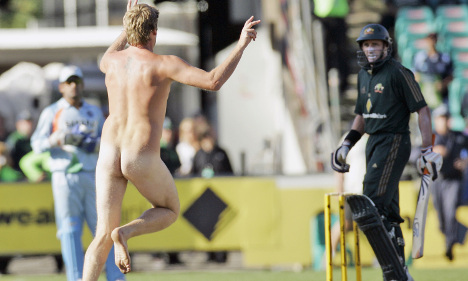 A different streaker in Sydney in 2008. Photo: Rob Griffith/TT
Kjell Hanseklint, 62, who has been an officiant at non-religious wedding ceremonies in Sweden since 2002 told The Local that the bizarre joke was the strangest event he had experienced in his career.
"It happened very quickly and couldn't keep a straight face," he said.
"First the bride said 'oh' and then they [the audience] all started laughing because they all knew him."
Hanseklint said he was just wrapping up the ceremony and had invited the new husband to kiss his new bride, when the naked man turned up and did a lap of the room before making a swift getaway.
"He stayed only a few seconds, ran around and then was straight out again," said Hanseklint.
"He had apparently made a bet with the man who was getting married, who was his friend. It was a lot of fun."
The officiant revealed that the couple he had wed were both "around 40", had teenage children and were from Skellefteå, but would not go into further details about either them or the streaker.
But Sweden's Aftonbladet newspaper later featured an interview with the prankster, naming him as Ola Söderberg.
"It was fun. We all got a good laugh," he told the tabloid.
The story has gone viral since it was first picked up by regional newspaper Norran. But despite "telling several friends" about his experience at a football match over the weekend, Hanseklint insists he was not the first to spill the beans to the media.
"I will say everyone I have told has laughed a lot," he told The Local with a chuckle.
Streaking – running naked through a public place – is an event more frequently associated with sports games around the world, rather than weddings.