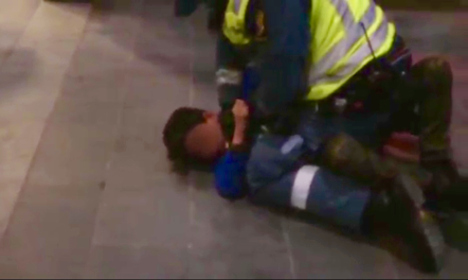 A screenshot of the controversial incident from YouTube.
Ulf Hansson, the prosecutor in charge of the case told regional newspaper Skånskan that he had made a "cumulative assessment" of the material given to him following a "solid" investigation into the guard's actions and concluded that: "It is not a crime, what they did".
The actions of the guards caused a nationwide stir earlier this year after a video of the incident went viral, clocking up more than three million hits.
Another local newspaper, Sydsvenskan, first obtained the footage which appeared to show one of the men pushing a child onto the ground, sitting on him and holding his hands over his mouth. The boy could be heard reciting the Islamic prayer the Shahada ('There is only one God, and Muhammad is his Prophet'). Another older child – believed to be a relative by some media – was shown watching the events from a nearby bench. He was also restrained by the other guard.
The charity Save the Children was among the groups that criticized the crackdown by the guards and demanded that both boys get an apology.
On Monday Hansson told Skånskan that he had closed a preliminary investigation into the alleged crime after watching the video and listening to recorded phone calls and reading interviews with the boys as well as statements from witnesses. He said that both of the guards had been interrogated.
Hanson said that after reviewing the evidence, be believed that the security guard shown pinning the younger child down "was correct in his intervention".
The move followed the release of separate CCTV footage by Swedish broadcaster of events which took place before the physical altercation.

The second video showed the two boys standing at the train station with the security guards. The younger one suddenly appeared to react to something and lashed out at one of the men, who then grabbed him. As the boy tried to get free by kicking at the guards, they the wrestled him to the ground.

Swedish criminologist Leif GW Persson told SVT's Crime of the Week ('Veckans brott') show that he believed the case would be dropped.

“He starts to fight, spit and bite and it's in that situation that the guard puts his hand over his mouth. I find it difficult to see any other ways in which you could have solved that situation,” he said on the programme.

Both children are understood to be refugees from Morocco. Following the incident they somehow managed to flee the scene and eventually ended up in Denmark. They have since returned to Sweden but reports suggest that they have tried to escape from at least one other care home.