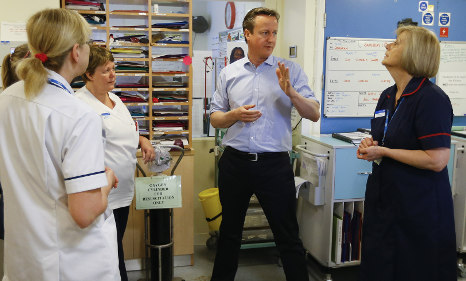 British Prime Minister David Cameron during a visit to a British hospital in Whitby, England earlier this month. Photo: TT
The move could affect millions of British expats living abroad in EU countries who currently return to the UK for routine doctors’ visits. Many fail to register with a local doctor in their new country, particularly in the early stages following a move abroad.
Under new rules that came into force earlier this month, expats who make use of the NHS in the UK will be asked to declare that they are ‘ordinarily resident’ in the UK before they are offered medical treatment.
Those who live elsewhere in the EU, Norway or Switzerland, and who want planned treatment could find themselves forced to pay up-front, although they may be able to claim this money back later.
Even expats seeking emergency healthcare during short visits home could also face steep charges if they don’t have the paperwork from their new country in order, as the NHS seeks to claw back £500 million a year ($746 million, €695 million) in lost revenue.
2.2 million Brits are estimated to live in other EU countries, according to UK Think Tank, the Institute for Public Policy Research.
Long-standing European arrangements state that EU citizens should seek healthcare in the country they live in, regardless of their citizenship. They can seek healthcare in other EU countries, but this must generally be authorized and billed back to their country of residence.
But in a change to UK rules, expats who want treatment in the UK now have to show a European Health Insurance Card (EHIC) issued by their new country. Until this month, former UK residents were automatically entitled to use the NHS for free if they fell ill during a visit. In practice, many expats also used the NHS for planned treatment too. However now this right is being removed.
31-year-old Rebecca Reading, a British expat with a Swedish partner who has lived in Stockholm for two years told The Local: "The first I heard about the changes was when I was notified by a friend, and I must say I was pretty shocked".
"I think the changes are very unfair, especially given that a large majority of us have paid tax for a good ten plus years and still remain British citizens. I can understand the law affecting those who have perhaps been awarded permanent residency in their new country of residence and can therefore get a passport. However for those that haven't met that requirement yet it seems very unfair." British Prime Minister David Cameron during a visit to a British hospital in Whitby, England earlier
this month. Photo: TT
In an email to The Local, the UK Department of Health confirmed that there is no ‘grace period' following a move abroad during which expats access the NHS

The charges faced by patients without an EHIC card or proper insurance can be significant. Intensive care beds are charged at a rate of £1,800 a day (23, 301 kronor,  €2495, $2683) plus the cost of procedures and drugs. Even hospital outpatient visits can be costly, at £248 per visit (3210 kronor,  €348, $369). The Royal Berkshire NHS Trust, one of 59 NHS Hospital Trusts in England, says on its website that patients who leave a debt could find their details registered with the UK Border Agency, meaning they could be stopped next time they try to enter or leave the country.
READ ALSO: "Sweden's healthcare is an embarassment"
Some argue that the new declaration could leave expats with no option but to go private or risk going without automatic access to healthcare.
Joe Coaker of ALC Healthcare, a private insurer focused on expats, told The Local: “We often hear from expatriates who question the need for international health insurance as they imagine they can return to the UK and fall back on the NHS or the State healthcare in whichever country they come from,” he said.
British workers in other EU countries such as Italy and Spain have told The Local that they have struggled to get their paperwork in order due to lengthy bureaucratic delays in their new adopted home towns and cities.
However a female expat who recently relocated to Stockholm after studying in the UK, where she was entitled to free NHS healthcare, told The Local it "super easy" to sign up for a new EHIC card when she moved to Sweden, with forms available online and help available over the phone in English.
But, asking to remain anonymous, she added that if the British government was planning a crackdown on overseas Brits seeking healthcare back home, she felt this needed "to be supplemented with support for how to do so".
"I understand the need to make clear line divisions for policy making purposes but I think greater regard has to be made for the realities of personal circumstances. Building a trusting relationship with a foreign health system tends to be one of the final things in moving home," she said.
"People often don't live in a binary of 'ordinary residence', especially if they are close by in another EU country, and the once a year trip to the doctor and dentist in your home town is part of an enduring link a lot of people have with 'home'. Home isn't always where the house is!"
The recent changes do bring better news than some feared for British retirees in Europe. Anyone living in the EU and receiving a British state pension will still be entitled to free healthcare in the UK, as long as they hold a valid S1 form, which is obtained from British authorities before moving abroad.
The move comes after the British government decided last year that it would stop paying the overseas healthcare costs of UK pensioners based in other EU countries, leaving many Brits abroad facing big bills.
Sweden was ranked the worst in the Nordics for healthcare in the most recent European Health Consumer Index (EHCI) and long waiting times were a key issue ahead of last September's election.
It's overall ECHI position in 2014 was 12th, down from 6th place in 2007. While the study did not combine statistics from across the UK, it put England in 14th place.