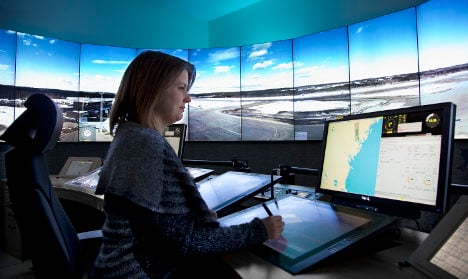 Staff working at Örnsköldsvik airport. Photo: TT
"The first Remote Tower Services landing!," Sweden's Air Navigation Services (LFV) announced on Twitter, under a picture taken from the plane before it landed around noon (1000 GMT).
The plane flew from the town of Sundsvall to Örnsköldsvik, around 150 kilometres (95 miles) to the north. Both the take-off and landing were guided by the air traffic control tower in Sundsvall.

According to LFV, cameras and sensors collect live-time information at the Örnsköldsvik airport's remote tower, which is relayed to air traffic controllers in Sundsvall.
“Remote Tower Services is a development programme that we are very proud of. We are the first operator in the world to receive operational approval and there is a lot of interest among our customers in Sweden and around the world. RTS is an important product for us and our partners. It gives us a good position and strong competitiveness," said Olle Sundin, LFV's Director-General in a statement.
“We see a great interest from both small and large airports that have a need for Remote Tower Services in order to address the challenges that they face. This system contributes toward greater efficiency and today marks the start of an exciting development to which Saab has a lot to offer," added Håkan Buskhe, President and CEO of Saab.
Pilots experienced no difference in their communication with the tower during the official maiden voyage, according to LVF.
"It went very safely!," a Sveriges Radio journalist on board the first flight told the radio station with a laugh after the landing, which was experienced by 50 passengers.
"I held on to the armrest tightly but there was no problem. And if I understood correctly, for the pilot it made no difference," she added.

The two airports were chosen "for geographic reasons", Lindgren said without providing further details.
The technology is expected to be gradually rolled out in other airports in Sweden.