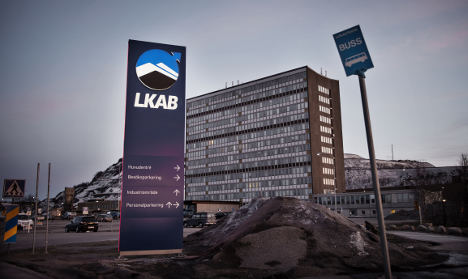 Swedish mining company LKAB is helping fund the move. Photo: TT
The apartment blocks being pulled down this week are among the newest in the town, having been commissioned by mining firm LKAB for its workers in the 1960s.
The demolition got underway on Wednesday afternoon, with Sweden's public news network SVT broadcasting it live.
Many residents have already left the area known as Ullspiran after being helped by the municipality to move into new housing.
But the demolition marks the start of a huge project that will see around 3,000 apartments as well as approximately 200,000 square metres of buildings used by schools, businesses and health care organizations either demolished or moved over the next 20 years, including some which were built more than a hundred years ago.
The town has become something of a global celebrity in recent months, with journalists from every continent visiting to report on its unusual future.
"Today it's the newest houses going and I guess they are not so very special. But when they start to tear down the really old buildings then it's for sure that people are going to get sad," Gun-Britt Landin, a long-time Kiruna resident told The Local.
She works at the former home of Hjalmar Lundbohm, the first manager of the LKAB mining firm. The wooden building is now a museum and a café and one of those that will be rescued and moved as the town shifts east.
"At first, when we got the first information in 2004, in a way people didn't believe it was going to be such a big move. Now we know it is half our city that is going away including a lot of very old houses. So this is just the start," she added.
IN PICTURES: The Swedish mining town that's being moved 3km
But others were much more emotional about the long-awaited event.
“It’s like coming to a funeral, it’s just awful to see,” Carl-Johan Mäki told SVT as he watched the demolition of the apartment block where he and his family have lived for 37 years.
Mäki, who works for LKAB, says he has full understanding for the move and is pleased with his new home just a few hundred metres away.
“But this is very emotional,” he said as a demolition claw ripped into the red-brick building behind him.
“This was our castle for 37 years and now it’s being razed to the ground.” The Leveäniemi pit in Kiruna which is set to re-open following the town's move. Photo: TT
Kiruna is being moved because of concerns that heavy mining activity underneath the town could affect residents' safety, by leading to cracks in buildings and subsistence, which could damage electricity lines and water pipes.
In 2004, state-controlled owner LKAB gave local politicians an ultimatum: move the parts of the city centre threatened by collapse if underground expansion plans went ahead, or risk stifling Kiruna's largest employer.
Although LKAB is paying for all the land it will use, the municipality has been responsible for the urban planning of the new town.
Christer Winsa, the project manager for the city move told Swedish broadcaster SVT on Wednesday: "We have kept on moving Kiruna in the 100 years since the mine opened, and we will keep on for another 100 years".
The town has kept evolving since the mine opened in the early twentieth century.
During the 1970s, residents were asked to leave the area called 'Ön' (the Island). Part of the town's large lake (Luossajärvi) has been drained and the road to the LKAB industrial estate has already been relocated due to ground damage caused by mining. LKAB staff at the Leveäniemi pit. Photo: TT
When The Local visited Kiruna last summer, residents appeared deeply divided about the move.
A shopkeeper, who gave his name as Jan said: "My shop's from 1925, it's one of the oldest around. The move is rather exciting – it's a big event for this town – but I also have negative feelings because this building will be torn down in a few years.
"I'm 64 and I'll hand the business to my daughter. She'll take over the shop in the new place. As for the town move, you have to be realistic. LKAB is the reason we're here – think what would happen if they couldn't expand. But it sure is unusual to have to move for a mine."
But another man, Göran added: "My place isn't in the zone that's being moved, but one of my mates will have to leave. It's such a pain, I think…for those of us who drive, we're looking at longer distances with the replacement roads they'll build. I'm crossing my fingers for buses."
On Wednesday, Winsa was unable to give SVT a definite answer about the total cost of the project, for which LKAB is contributing billions of kronor.