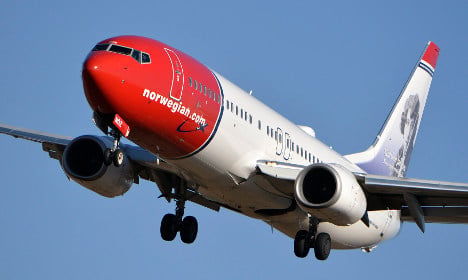 New routes have been launched from Stockholm, Copenhagen and Oslo. Photo: Johan Nilsson/TT

Travellers based in Scandinavia will have two new routes to look forward to come November. Norwegian announced on Tuesday that it will begin to offer flights from Stockholm to San Juan in Puerto Rico and to Las Vegas. The former will also launch from Oslo.

And those based in southern Sweden will be able to travel to the same destinations from Copenhagen, as well as to St Croix in the US Virgin Islands.

“Norwegian’s long-distance routes are very popular and we are very satisfied to offer our passengers brand-new destinations in the Caribbean and the US,” Norwegian spokesman Thomas Ramdahl said.

The budget airline's flights from Stockholm to Las Vegas will begin operations on October 31st, while flights to Puerto Rico will commence on November 3rd. The airline will offer one departure each week to the new destinations.

Meanwhile, the new flights from Copenhagen to Puerto Rico and St Croix will take off on November 6th, while flights to Las Vegas will start on November 10.

"We're incredibly pleased that Las Vegas, thanks to Norwegian, for the first time gets direct flights from Stockholm and Copenhagen. Increased access to Las Vegas will get us several million new visitors, which helps us reach our goal of 30 percent international visitors during the next decade," said Cathy Tull, senior vice president of marketing for the Las Vegas Convention and Visitors' Authority in a press statement.

The new routes may spell some good news for Norwegian, after a bitter 11-day long pilots' strike left 150,000 passengers stranded in March. The strike is estimated to have cost the budget airline 375 million kronor ($43 million).

For those travellers not interested in a long haul, Ryanair also announced three new routes from Copenhagen on Tuesday.

The budget airline's CEO Michael O'Leary said on Tuesday that Ryanair will add routes to Budapest, Malaga and Alicante.