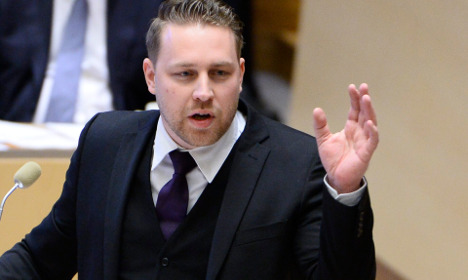 As the Local reported last month, Gustav Kasselstrand and William Hahne, chairman and deputy chairman of the party's youth organization (SDU), were being investigated along with around 20 others by the Sweden Democrats' (SD) members committee.

Now, SD parliamentary group leader and former acting party head Karlsson – who took over the reins of the party during Jimmie Åkesson's six-month sick leave for exhaustion – has confirmed in an interview with Swedish public broadcaster SVT that the committee had recommended the pair for expulsion.

“It's normal practice that we don't comment on individual cases. But the highest representatives of the youth organization, William Hahne and Gustav Kasselstrand, have themselves chosen to carry out the discussion about their expulsion cases in public,” Karlsson told SVT and mentioned contact with extremist parties abroad as one of the reasons.

Kasselstrand as well as Hahne have denied the accusations.

“This hardly came as a surprise. This has been a show trial from beginning to end,” Hahne told news agency TT and added that neither he nor Kasselstrand will step down from their SDU positions even if they are expelled by the mother party.

Eight people in total have been recommended for expulsion. The formal decision will be taken by the party executive committee next Monday, but can be seen as a "done deal" according to one of SVT's expert commentators.

"Considering that Mattias Karlsson states it in public on television you can likely see the matter as a done deal," said Mats Knutson.

"It is completely sensational that the leadership of a youth organization is expelled by the mother party. I have never heard of anything like this happening in Sweden before," he added.

The nationalist SD is Sweden's third-biggest party, after scoring a record 12.9 percent of the vote in last year's general election. The current conflict's fault line is between its leaders, who want the party to present a social-conservative profile and its youth organization, the SDU, who has pushed for a more radically nationalist line.

Both Hahne and Kasselstrand hit out at party leadership after the news of the mass expulsion first became known, with Hahne referring to it as “pure Soviet methods” and adding, “It is frightening that some of the people among SD's leadership has as their ambition to govern Sweden. Total lack of respect for democracy”.