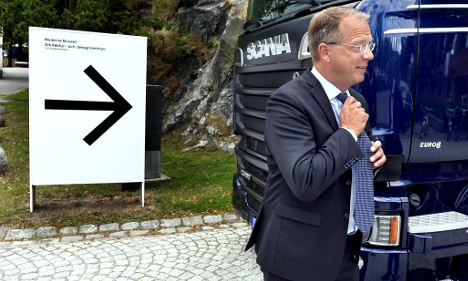 The announcement came as the Swedish group said that its first quarter profits had almost quadrupled to 4.25 billion kronor ($490 million), thanks to strong sales and efficiency gains.

Lundstedt will replace Olof Persson who pushed for greater efficiency at the truck maker for four years.

Jan Gurander, the Group Chief Financial Officer, will be acting President and Chief Executive Officer in the interim.

“After three years of focus on product renewal, internal efficiency and restructuring, the Volvo Group is gradually entering a new phase with an intensified focus on growth and increased profitability. This will be achieved by further building on our leading brands, strong assets and engaged and skilled employees all over the world", said Carl-Henric Svanberg, Chairman of the Board of AB Volvo.

“Martin Lundstedt has 25 years of experience from development, production and sales within the commercial vehicle industry. He is also known for his winning leadership style.”

Lundstedt has spent his career at Scania. He joined in 1992 as an intern and has held a number of executive positions.

Svanberg praised his predecessor, saying: “Olof Persson has with energy and determination carried out an extensive change of the Volvo Group.”

“He has focused Volvo on commercial vehicles and sold unrelated businesses and assets to a value of over SEK 20 billion. He introduced a functional organization and paved the way for cost savings of SEK 10 billion. He also concluded the agreement with one of China’s largest truck manufacturers, Dongfeng and led the company during the largest product renewal in the Group’s history. Today the Volvo Group is considerably better positioned to compete for leadership in our industry.”

Swedish press reports have suggested Persson has come under pressure in recent weeks amid internal dissent and a desire by some Volvo shareholders to speed the pace of restructuring.

Lundstedt's relationship with Scania's Volkswagen bosses was unclear after he opposed the German car marker's March, 2014 decision to increase its stake in Scania from 63 percent to full ownership.

Though Lundstedt argued the price offered for the outstanding share of Scania was too low, Volkswagen eventually obtained the desired 100 percent.

Volvo Group is separate to the Volvo Car Corporation, the car firm that was sold to Ford in 1999.