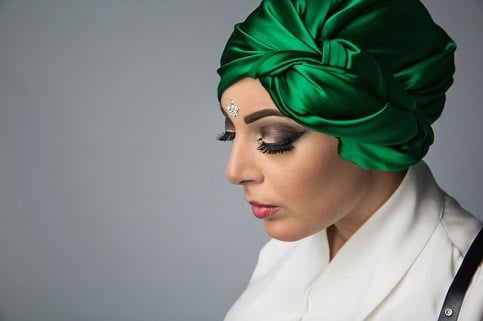 Fashion designer Iman Aldebe is best known for creating an accompanying veil to go along with a Swedish police uniform. On Wednesday she presented an entire catwalk of Muslim fashion at the Architecture and Design Center in Stockholm.

Aldebe said there is a need for modern Muslim fashion. "Since I was six I wanted modern fashion. I thought my mum’s clothing was boring, with very straight lines and muted colours," she told SVT.

Simultaneously, Leila Karin Österlind, a PhD student of ethnology at Stockholm University, presented her thesis project about "Muslim Cool". She coined the term to decsribe how Muslim fashion, just like other target groups, has become a global fashion industry with varying trends – and how Muslim Cool fashion even impacts western and Swedish fashion.

"One example is the typical Swedish fashion silhouette of loose-siting clothing or oversized pants, or a tube scarf," Leila Karin Österlind said. "But even the hipster beard shows definite influence from Islam."

Iman Aldebe and one of her designs. Photo: SVT

Indeed, Muslim fashion even suits the Swedish climate, she said.

"The tube scarf must be one of the most practical clothing items for Swedish weather!"

Swedish Instagram celebrity Mariam Moufid was one of many fashion-interested and Muslim guests at the event, and participated in a panel discussion.

She is what is known as a hijabista – a fashionista who combines the latest fashions with an abaya or hijab, keeping her fashion up to date but still within the guidelines of Islam.

"There are many Muslim bloggers who inspire girls around the world with their fashion," she said. "And it can be more vintage inspired or minimalistic. There isn't a specific style which is 'Muslim'; it can be different kinds of styles, as long as you're covered."

Muslim women who are interested in fashion can still wear a lot of popular clothing, such as long maxi skirts and lose sweaters, Moufid said.

But designer Aldebe is creating an entire collection to showcase interesting fashion specifically for Muslims.

"When I started gong out wearing my turbans people wondered if it was fashion or religious clothing," she said. "But there is nothing scary with what I'm doing. It's fashion.  It's no big deal in England. Why should it be here? What is so scary about a woman in a hijab?" Interested in similar events and the fashions? See the ArkDes webpage or see Iman Aldebe on Facebook.