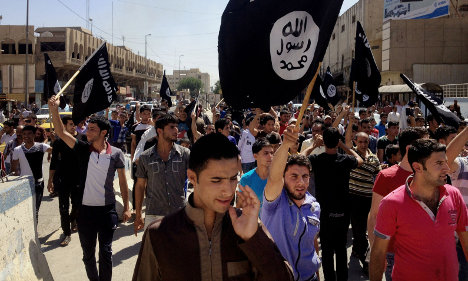 Pro-Isis demonstrators in Mosul, Iraq in 2014. Photo: TT
Security Service officials previously said they thought that between 30 and 35 Swedes had been killed while fighting alongside Isis (also known as IS and the Islamic State) in the Middle East.
"This does not mean that these people died recently, but more that we have recently got the data. It is difficult, sometimes impossible, to get confirmed figures," Fredrik Milder, a press spokesperson for Säpo told the TT news agency on Thursday.
The new figures emerged just a week after Sweden's Security Service told The Local that there was "very little" it could do to stop people travelling to Syria to join al-Qaeda inspired groups, as EU officials estimated up to 6000 people from across Europe had fought in the war-torn nation.
"About 50 of those known to have travelled to Syria have returned to Sweden. They travel to Syria, return to Sweden and tend to go back again," said press officer Fredrik Milder.
Säpo confirmed that at least 150 Swedish residents were known to have been to Syria or Iraq to fight for Isis or other extremist groups.
READ ALSO: 'Very little to stop Swedes fighting in Syria'
Last week EU Justice Commissioner Vera Jouriva told French newspaper Le Figaro that the true total number of fighters from across Europe was likely to be far higher than even the latest estimate of 5000 to 6000 due to the difficulty of tracking foreign fighters in the conflict.
She said that the EU wanted to promote prevention as a means of curtailing the steady flow of European nationals, looking at the diverse reasons of why people joined jihadist groups beyond simply religion.
Isis or the Islamic State, which rules a swathe of territory in Syria and Iraq is also believed to be attracting growing numbers of foreign fighters from outside Western Europe.
More than 215,000 people have been killed in Syria's four-year war, which is increasingly dominated by jihadist groups.
Earlier this month Sweden announced it would send up to 120 troops to northern Iraq to train Iraqi and Kurdish fighters as part of the US-led coalition against Isis.