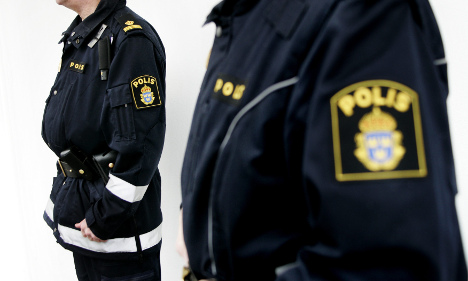 A Swedish police uniform. Photo: Jessica Gow/TT
The men, who are all in their twenties, were on their way to see a show on Broadway when they heard the operator of the train call for help over the intercom from any police officers who might be on the train, according to reports in the US media.
“We thought maybe someone needed help,” Samuel Kvarzell, 25, told the New York Post (NYP).
When he and his friends got to the front of the train, they saw a homeless man being attacked as passengers looked on. The group managed to restrain the person who was beating him, who was also believed to be homeless, according to the paper.
They were able to keep a lid on any further violence until NYPD police arrived on the scene.
Stockholm police confirmed to The Local that Kvarzell works for the force, but would not initially comment on his actions.
"He is on holiday still and he is back on Tuesday," said a spokesperson.

Four Swedish cops took a break from their vacation to break up a subway fight http://t.co/KEZyqJ0ION pic.twitter.com/SlbtcfhZfj

Samuel Kvarzell and his friends will be minor celebrities by the time they return to Sweden. By Thursday afternoon the story of their actions had gone viral on social media, after being picked up by several US media sites including Reddit.
The other officers on the trip – Erik Näslund, Marcus Åsberg and Eric Jansberger – are all understood to be working for other regional police forces in the south of the country,
“One of the guys was on top of the other guy so we separated them,” Marcus Åsberg, 25, told NYP.
He added that he and his fellow cops were in desperate need of a beer before proceeding to see Les Miserables at the theatre.
“We came here for vacation; we’ve been here one day,” he said. “We’re no heroes, just tourists.”