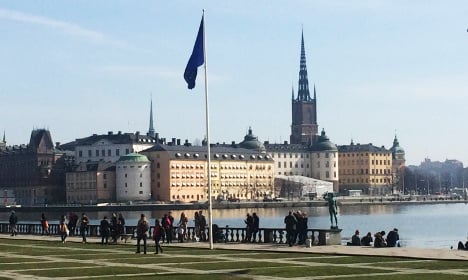 Swedes enjoying the sunshine in Stockholm. Photo: The Local

Summer arrived in the Swedish towns of Gothenburg, Örebro, Västerås, Eskilstuna and Torpabron on April 19th, meteorologists said on Friday.

April is a notoriously whimsical weather month in Sweden. But this week, Swedes have been getting out and about, enjoying the long-awaited sunshine after a cold, Nordic winter.

Arvika in central Sweden has recorded the highest temperature of the year so far, with 22C reached on Monday.

Forecasters deem summer to have arrived when average temperatures remain above 10 degrees or more five days in a row. And once summer's here, there's no going back, said Swedish public broadcaster SVT's meteorologist Åsa Rasmussen.

"Weather has nothing to do with seasons. This is just about temperature," she said.

Check the weather forecast where you are in Sweden

Curiously, the meteorological summer arrived in Sweden on the same day last year. But while this is three-and-a-half weeks earlier than normal, it does not break the record from 2011, when the seasons changed as early as April 17th.

Skåne in southern Sweden could also expect to get a taste of the warmer weather soon, but the rest of the country will have to wait. Colder temperatures are expected this weekend.

"Summer is not going to spread," said Rasmussen.

And in northern Sweden, it's too early to dig those sunglasses out from the back of the wardrobe. Winter still has not left some parts of the far north, according to the meteorological definition.

"We have all the different seasons in the country right now, except autumn," said Rasmussen.

2014 as a whole was Sweden's hottest year for eight decades and many are hoping that this year will follow suit.

Forecasters from Sweden’s weather agency SMHI looked at the mean daily temperature last year and found it was between 6.85 and 6.9C in 2014. The previous record was 6.73C in 1934.