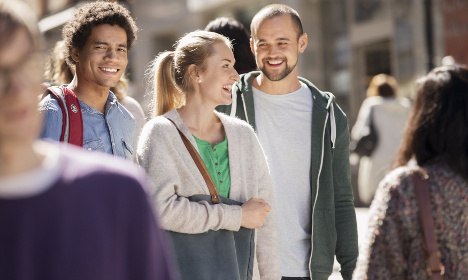 Swedes are the eighth happiest people in the world. Photo: Susanne Walström/imagebank.sweden.se

The UN's 2015 World Happiness Report is the third report since the first in 2012 seeking to quantify happiness as a means of influencing government policy.

In the survey published on Thursday, Switzerland was deemed the happiest country in the world, closely followed by Iceland, Denmark, Norway and Canada. Finland, the Netherlands and Sweden. New Zealand and Australia rounded off the top ten.

In most parts of the world, ending up as eighth happiest of 158 countries would be celebrated. Yet in Sweden, most media have found a way to look on the dark side. Media coverage has focused on the fact that Sweden is down from fifth place in the last survey in 2013 and the fact that it has found itself beaten by all its Nordic neighbours. "Depressing," commented one journalist on Twitter.

"A lot of people are pretty happy despite everything. But we take this happiness for granted in a way, so when things are shown to be less than perfect we like to discuss it," said happiness researcher Filip Fors of Umeå University when The Local rang him up to ask why Swedes were not rejoicing at the results.

The Scandinavian country has consistently ended up high in happiness lists for decades, thanks to strong social support, affluence, and relatively honest and accountable governments.

"Eighth place is very good. But generally we are more interested in reading and talking about what's negative. Many psychologists argue that our attention is drawn to more negative news, partly because it's simply more important to learn about things that don't work than things that do work," said Fors, but added that talking about unhappiness could become a self-fulfilling prophecy.

"Those people who are the happiest tend to focus on things that are positive. But then again, if we never focused on anything negative we would never solve any problems."

In 2015 World Happiness Report, academics identified the variables as real GDP per capita, healthy life expectancy, having someone to count on, perceived freedom to make life choices, freedom from corruption and generosity. The top 13 countries were the same a second year running although their order had shifted, with Sweden now behind all its Nordic neighbours.

"You should be careful not to compare countries that are quite close to each other in surveys, because it varies quite a lot depending on the measurements you use. If you ask people general questions about how satisfied they are with their life on the whole you get answers that are quite different to if you ask them how they were feeling last week," Fors, who argues that the latter is a more reliable indicator of happiness, told The Local.

And unlike many of his compatriots, he is not unnerved by Sweden's drop from fifth to eighth place.

"I wouldn't want to try to analyze that. It can very well just be due to coincidence. If a country falls from fifth to twentieth place it would maybe raise a few eyebrows, but not otherwise," he said.

In the survey, the United States trailed in 15th place, behind Israel and Mexico, with Britain at 21, pipped by Belgium and the United Arab Emirates. France ranked number 29, behind Germany in 26th place.

Despite the conflict raging in Iraq, that country was ranked 112, ahead of South Africa, India, Kenya and Bulgaria.