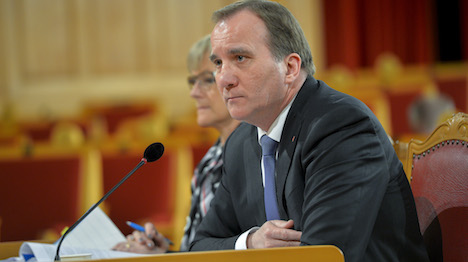 Stefan Löfven gets a grilling from the powerful Constitutional Affairs Committee of the Swedish parliament. Photo. Henrik Montgomery/Scanpix

Löfven caused fury in Israel last October after he announced the move as a centrepiece of his government’s programme.

"A two-state solution requires mutual recognition and a will to peaceful co-existence. Sweden will therefore recognize the state of Palestine," he told Sweden’s parliament, the Riksdag, in his first speech as prime minister. The same day, Swedish embassies were sent letters outlining Sweden’s position on the “state of Palestine.”

In a grilling on Friday by the powerful parliamentary committee on constitutional affairs, the main opposition Moderate Party said Löfven’s move was unconstitutional. They claim he should first have consulted the parliament’s Foreign Affairs Committee.

But Löfven defended his handling of the announcement, arguing that that his speech merely expressed an “ambition”, and did not claim that the government had made a formal decision at the time.

“The speech outlining the government’s programme would be seen as watered-down if it didn’t contain the government’s views on the foreign policy area,” he said. He added that the plan was discussed by the Foreign Policy Committee before the formal government decision was made.

Earlier this month, Foreign Minister Margot Wallström faced questions from the same committee on the same issue. She also argued that the decision was arrived at in a “correct and proper” way.

Sweden’s recognition of Palestine was followed by non-binding parliamentary votes in France, Britain and Ireland – although in December Denmark’s parliament voted against a similar move.