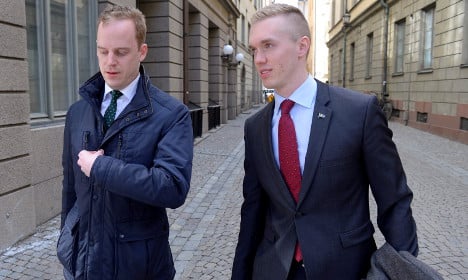 As The Local reported last month, Gustav Kasselstrand and William Hahne, chairman and deputy chairman of the party's youth organization (SDU), were being investigated along with around 20 others by the Sweden Democrats' (SD) members' committee.

Parliament group leader Mattias Karlsson has previously said that the pair were involved in a probe over alleged contacts with extremist parties abroad. Both Kasselstrand and Hahne have denied the accusations and hit out at party heads earlier on Monday.

"The committee is just a ratifying instance for Mattias Karlsson. They're a bunch of puppets," Kasselstrand told Swedish news wire TT.

After previously saying they would remain on their posts as heads of the SDU no matter what happened, it has now been reported that the duo plan to step down. But Hahne, who is also an elected member of Stockholm Council, said that he would remain as councillor.

"I know that I represent a large part of the Sweden Democrat voters, and I will continue to represent them," he told Swedish public broadcaster SVT on Monday.

Eight people in total were recommended for expulsion by the members' committee last week.

Sweden Democrat party secretary Richard Jomshof told reporters at a press conference on Monday afternoon that seven members would be expelled from the party out of the 24 investigated, mentioning only Kasselstrand and Hahne by name.

He added that six or seven people had voluntarily chosen to leave the party during the course of the probe.

"All of them have had proven and clear connections to extremism," said Jomshof.

The nationalist SD is Sweden's third-biggest party, after scoring a record 12.9 percent of the vote in last year's general election. The current conflict's fault line is between its leaders, who want the party to present a social-conservative profile and its youth organization, the SDU, which has pushed for a more radically nationalist line.

Both Hahne and Kasselstrand hit out at the party leadership after the news of the mass expulsion first became known, with Hahne referring to it as “pure Soviet methods” and adding, “It is frightening that some of the people among SD's leadership have as their ambition to govern Sweden. Total lack of respect for democracy”.