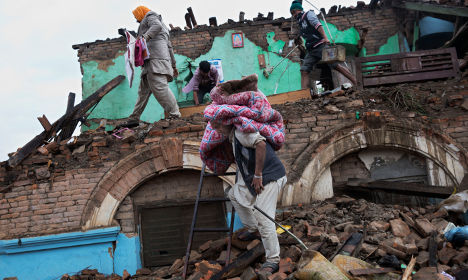 Residents rescue items from the debris of a house damaged in Saturday's earthquake in Nepal. Photo: AP Photo/Bernat Armangue

But the death toll is continuing to rise – and Swedes caught up in the disaster remain stranded in the mountain region.

A flight chartered by the Swedish Contingencies Agency (MSB) is set to take off from Örebro airport in central Sweden at around noon and is expected to land in Nepal at 1am on Tuesday.

The plane will be carrying a team of 60 responders and 12 dogs along with heavy search and rescue equipment, including cars, motorcycles and camp gear. The Swedish International Development Cooperation Agency (Sida) has allocated 13 million kronor ($1.5 million) to the operation.

Meanwhile, the Swedish Foreign Ministry said it was desperately trying to reach the 150 Swedes believed to be in Nepal.

“We are continuing in our attempts to get in contact with those we have not yet heard from, as are their families,” press spokesman Gabriel Wernstedt told Swedish tabloid Aftonbladet.

He said that the Swedish Embassy in New Delhi would be sending workers to the honorary consulate in Kathmandu to assist on site, but it was unclear on Monday morning when this would happen.

The 7.8 magnitude quake that struck shortly before noon Saturday local time destroyed parts of Kathmandu’s historic city centre and was felt as far away as Bangladesh and Tibet. The official death toll has grown rapidly since the first reports of the tragedy and was at 3,200 in the early hours of Monday.

The MSB rescue effort comes after Sweden's Foreign Minister Margot Wallström and International Development Cooperation Minister Isabella Lövin pledged in a joint statement on Saturday that Sweden was ready to respond to calls for assistance.

“Our thoughts and sympathies – and those of the entire Government – are with those who have lost loved ones, who are living in uncertainty about the fate of their families and friends, and whose homes have been destroyed,” they said.

Devastating reports on earthquake in Nepal. Our thoughts are with all affected. Sweden is ready to assist.