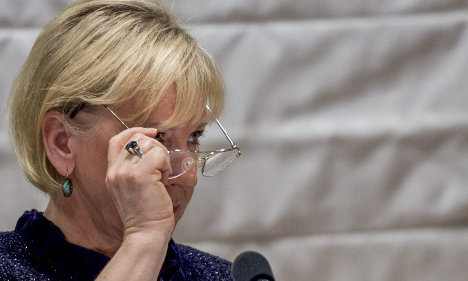 Wallström said it was “more urgent than ever” that the world rid itself of all nuclear weapons, as the UN 2015 Review Conference of the Treaty on Non-Proliferation of Nuclear Weapons (NPT) got underway in New York.

Over the next four weeks, the UN will evaluate the NPT, a landmark international treaty designed to prevent the spread of nuclear weapons and weapons technology. Conferences to review the operation of the Treaty have been held at five-year intervals since the Treaty went into effect in 1970.

“We hope that the Review Conference takes a step forward in terms of nuclear disarmament. But one should have realistic expectations, because it is very slow,” Wallström told Swedish newspaper Svenska Dagbladet.

The minister said that while talks often focused on the technical aspects of nuclear weapons, she saw the key issue as being how a nuclear attack might affect ordinary people.

“This is about the survival of humanity,” she said.

It is not the first time that Margot Wallström has been vocal about nuclear weapons since her appointment last year.

In December she took part in a separate international conference on the humanitarian consequences of nuclear weapons in Vienna.

“Our line is clear: all nuclear weapons must be abolished,” she said in a debate article published by The Local following the talks in Austria.

“A nuclear weapon explosion would have appalling humanitarian consequences. Next year, 70 years will have passed since a single nuclear weapon killed 90,000 people in Hiroshima and levelled the city to the ground.”

Wallström has criticized the previous centre-right government led by Fredrik Reinfeldt for remaining on the sidelines of global debates about the issue.

In her latest comments to Svenska Dagbladet she said: "the new government wants to re-enter this arena".

The number of nuclear weapons in the world has declined from about 70,000 in the mid-1980s to around 16,000. But many countries have simply modernized their nuclear arsenals using the latest technology.

China, the US, Russia, Israel and the UK are among the nations still investing in nuclear weapons; the issue is currently a hot topic in Britain ahead of its general election next month. North Korea – one of the most secretive nations on the planet – is also believed to be developing and testing nuclear technologies.

Iran has long said its nuclear programme is peaceful but negotiations between the country and other major world powers are ongoing. The US Secretary of State John Kerry said on Monday that he hoped to secure a final agreement with Iran that would "close off all of Iran's possible pathways to the nuclear material required for a nuclear weapon and give the international community the confidence that it needs to know that Iran's nuclear program is indeed exclusively peaceful".

But he added that "the hard work is far from over and some key issues remain unresolved."