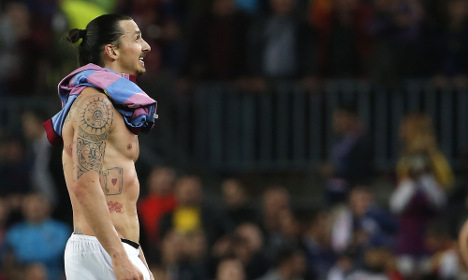 Zlatan Ibrahimovic at the Camp Nou Stadium in Barcelona last week. Photo: Emilio Morenatti/TT
PSG's Qatari chairman Nasser Al-Khelaļfi has said that the side's French manager Laurent Blanc will also stay on next season alongside Ibrahimovic and the team's other star players Edison Cavani and Javier Pastore.
The move comes just over a month after Sweden's best striker in history was slated for a foul-mouthed rant at a referee in which he blasted France as a “shit country”. He was later banned for four matches, subsequently reduced to three.
The player apologized for his outburst in a statement released after the game, saying: "My words were not targeting France or the French people. I was speaking about football and nothing else."
"I was speaking when I was annoyed and everyone knows that at these moments you can speak without thinking," he added.
PSG are in a battle with Lyon to retain their league title and are in contention to win both the French domestic cups, but the Champions League quarter-final defeat to Barcelona once again raised question marks over personnel.
Al-Khelaļfi, however, said in an interview with Le Parisien newspaper that he was not considering making widescale changes.
READ ALSO: What could Zlatan have against France?
Asked if Blanc would still be in charge as coach for next season, the Qatari replied: "Yes, of course," adding that it was "unfair" the criticisms that had been placed on him.
Turning to Ibrahimovic, he said that the big Swede would see out the final year of his contract.
"The matter is not even up for debate," he said. "He will be staying for us for next season, and that is for sure. And that goes for Javier Pastore too."
Finally Al-Khelaļfi said that he would not even listen to any transfer offers made for Uruguayan Cavani.
He did agree that there would be some team changes for next season and confirmed that there had been talks with Juventus midfielder Paul Pogba "but there are other big clubs that are after him."